Anti-virus software for the Mac remains a contentious topic, not least because - today at least - there are no viruses that can infect the Macintosh. But that's not to say that there is no malware crafted to infiltrate OS X. 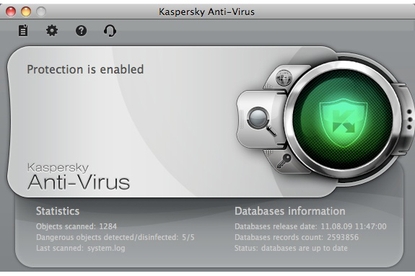 Contrary to recent dire warnings from AV vendors, the Mac is an inherently more secure platform than Windows - but very far from being an impervious one. Some isolated signs of trojans and worms in the last two years may be a signal that more dangerous malware is on the way. For today, Kaspersky Anti-Virus for Mac should provide some protection from known Mac threats, as well as serve as a seek-and-destroy tool for the millions more Windows viruses in the field. However Kaspersky Anti-Virus for Mac is not fully mature at this stage and does not include many of the features found in its Windows counterpart, making it indisputably overpriced in comparison.

Kaspersky is expanding its scope by offering Kaspersky Anti-Virus for Mac, its first security program for the Apple Mac. But how much does the Mac need anti-virus, and does it work?

Anti-virus software for the Mac remains a contentious topic, not least because - today at least - there are no viruses that can infect the Macintosh. But that's not to say that there is no malware crafted to infiltrate OS X.

In the last few years there has been a smattering of trojans and worms, which the user can be tricked into manually installing, either disguised as browser codecs or hidden inside some Adobe and Apple iWork software packages on file-sharing BitTorrent sites. Infection from such packages is not a covert process though, as you'd be prompted for an administrator password before installation.

Kaspersky Lab has built a reputation with its anti-virus (AV) and internet security products for Windows. In fact the Moscow-based company was one of the first to see the necessity of developing solutions to protect PCs, back in the 1990s when viruses were more an inconvenience that might flash annoying messages on the screen or at worst corrupt your hard drive.That was before money-making opportunities were exploited from lax personal computer security.

Today of course PC malware is an especially lucrative business, not just for the high-profile security companies who sell yearly subscriptions for their protection, but the unseen hackers and criminal organisations who try their best to install their nefarious code on unsuspecting people's PCs.

Their aim: to gain access to a computer in order to harvest personal details (such as credit card information) that can be used to defraud banks and shops, or to build a botnet from a network of thousands of compromised PCs.

This ‘robot network' can then be pressed into service at will to send spam, or bring down a particular website or an online business through a distributed denial of service (DDOS) attack. Or used in extortion scams, by merely threatening to do so unless a business pays a ransom to be left unmolested.

There have also been claims of patriotically motivated hackers using their tamed botnets to attack a whole nation's government, as happened to states such as Estonia and Georgia after political rows with Russia.

Additionally, while Windows AV programs often add heuristic testing to snag as-yet-unlisted threats based on their dynamic behaviour, the program's recognition of Mac malware seems to be focused on signature recognition.

Given its reduced feature set, we wonder why Kaspersky Anti-Virus for Mac costs the same as that of Kaspersky's complete internet security suite for Windows. Meanwhile Kaspersky's sophisticated AV-only package for Windows is only $39.95.

Nevertheless the scope of Kaspersky Anti-Virus for Mac is relatively wide. It continually checks for definition updates every 30 minutes (adjustable in the preferences pane), and it claims safeguards to prevent removal by a hostile agent. The depth of scanning can be tweaked also, and the program creates comprehensive logs, and its update downloading is compatible with proxy servers.

Adjustments of Kaspersky Anti-Virus for Mac are to be found within various parts of the app's preferences, although we had to dig down into preferences-within-preferences sometimes to switch on settings such as scan email files.

On first installation, it will download an update of the latest virus definitions from Kaspersky's servers, after which it's ready to execute its first scan.

The Kaspersky Anti-Virus for Mac interface comprises a floating window with a large green circular porthole to the right, which changes colour to an ominous yellow when it detects a possible threat. Clicking the magnifying glass button offers a choice of three scan modes.

The Quick Scan feature scours all files within specific directories deemed more sensitive to malware on the system's hard drive, focusing on folders such as ~/Documents, ~/Downloads, and /Library/StartUp Items.

The Kaspersky Anti-Virus for Mac program compares scanned files' signatures against Kaspersky Labs' list of known malware. Relatively speaking, this list includes a very small number of objects for OS X (around 40 at time of press, based on Kaspersky's database of OS X threats which stretches back four years ago); but the threat database also includes well over 3 million definitions from the predominant Windows threat landscape.

And this explains a more pertinent need for AV software such as KAV for Mac: to screen malware that's harmless to a Mac user, but which could prove ruinous if passed on to a Windows-using colleague.

Or indeed to a Mac computer if it has Windows installed on a Boot Camp partition, or under virtualisation with VMware, VirtualBox or Parallels.

A Full Scan feature, meanwhile, simply looks through the contents of all connected hard drives. In our tests on a MacBook Pro with an 50%-full 500GB hard drive, the Quick Scan took around 4 hours to complete, while the Full Scan took closer to 6 hours.

After some show-stopping teething troubles with the initial release of the product last October (including random crashes and over 150% CPU usage), Kaspersky issued an update this January which allowed our installation of the app to complete system scans, and to scan with crucially lower system resources.

We saw typical CPU usage pegged at around 20-30% for manual background scans, with the system remaining responsive all the while.

At all other times, the program sat in the background consuming around 3-5% CPU. At no point could we verify Kaspersky's claim of ‘consuming less than 1% of processing power'.

If Kaspersky Anti-Virus for Mac should find a flagged threat, you'll hear Kaspersky's trademark roaring-lion sound effect, while a pop-up window below the menu bar clock appears briefly with more details of the alert.

As well as on-demand and scheduled scans, the app will also screen new files as they arrive on the system, either downloaded over the internet or from external media. And even copying a file from one location on the drive to another set the program into action; we saw spikes exceeding 80% CPU use here.

Scans of all types are said to include a search within compressed .zip files, as well as other archives like .rar; but absent is any ability to check inside dormant .iso or .dmg images. In our tests, Kaspersky Anti-Virus for Mac remained oblivious to malware inside either of these popular disk image formats, although it would flag malware that was simply zipped.

Starting to appear with recent updates to Kaspersky Anti-Virus for Mac are more definitions to flag the presence of commercial keyloggers. While not ‘malware' in the sense of causing direct damage to the system, they may be operating without the active user's knowledge, perhaps installed by a suspicious spouse, employer, or for industrial espionage.

Some AV software is primed to alert the end user of the presence of such bugging software, while other packages give the computer's administrator the option of switch off alerts to other users about installed spy programs.

In the case of Kaspersky Anti-Virus for Mac, you'll need to first manually tick ‘Potentially dangerous software (riskware)' from the Threats tab of the app's preferences. But even then, we found it would miss some keyloggers we had installed on our test machine.