A reasonably good protective case with a cramped keyboard 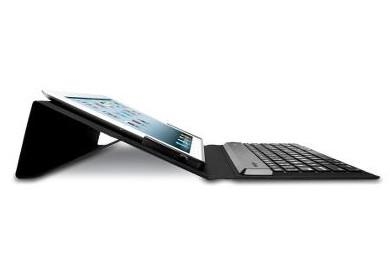 The Kensington KeyFolio Expert Multi Angle Folio and Keyboard for iPad provides reasonable protection and features a stand that can prop up your iPad at various angles, but small keys hinder the overall typing experience.

Kensington's KeyFolio Expert Multi Angle Folio and Keyboard for iPad provides reasonable protection and features a stand that can prop up your iPad at various angles. However, small keys hinder the overall typing experience.

The key feature of the Kensington KeyFolio Expert is the ability to position the iPad at multiple angles. Many iPad keyboard cases on the market don't allow you to do this, often only positioning the iPad at one angle. The case works similar to Apple's Smart Cover, with the microfibre material folding into portions. By folding the portions in whichever way suits you, you can position the iPad at a low-angle, a higher angle or at almost 90-degrees.

The higher angle position gives the KeyFolio Expert a significant advantage over competing keyboard cases. It allows a relatively comfortable typing experience on your lap without the fear of the iPad topping over. The lack of a flat surface (your thighs) still results in an awkward feeling experience, but this is significantly better than many other iPad keyboard cases we've tested.

The Kensington KeyFolio Expert also provides reasonable protection for your iPad. The microfibre case folds over the iPad protecting both the front and the back when closed, and a built-in magnet keeps the flap securely closed. Annoyingly, however, the keyboard rests directly on the iPad's screen when the case is closed, so we would suggest using a screen protector.

The design of the KeyFolio Expert means that the iPad's headphone jack and dock connector are accessible even when the case is closed. However, the case hangs over the top and the bottom of the iPad about half an inch so it does add a little bulk to the package.

The KeyFolio Expert Multi Angle Folio and Keyboard uses a solid plastic frame to attach to the iPad. It's easy enough to slide the iPad in and out of the frame but the design means the case only works with the 4th and 3rd Generation iPad's and is not compatible with the iPad 2 or the original iPad.

Connecting the KeyFolio Expert case to your iPad is a simple process. Simply hold down the power button for over five seconds to put the keyboard into pairing mode and go to the Bluetooth settings menu on your iPad to connect it. Enter the four digit numerical code on your iPad when prompted to finalise the connection.

The small display next to the power button is a nice touch. It displays a green battery indicator that turns red when the keyboard is charging and also shows a handy caps lock indicator, a feature often neglected on competing products. The keyboard charges via a standard micro-USB connector and Kensington includes a USB to micro-USB charging cable in the box. The company says the built-in battery will last for up to 80 hours with 60 days of standby time, so you shouldn't need to charge it very often.

Typing on the Kensington KeyFolio Expert is a mixed experience. The spring-loaded keys themselves are raised enough that they provide good tactility and most keys are in their correct places. However, the layout is cramped and the keys are quite small. We had particular trouble with the right shift key and the '?' key, which are smaller than most of the regular keys. If you're coming from a full sized keyboard, it will take a while to get used to this cramped layout.

A row of dedicated iOS function keys sit on the top row of the KeyFolio expert and a nice touch is the fact that they can be pressed without the need to use a function key. Shortcuts include home, screen brightness adjustment, gallery slideshow, and media controls including playback and volume.