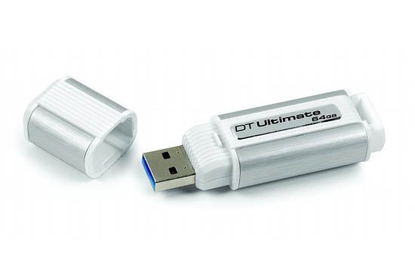 Compared to USB 2.0 flash drives, the Kingston DT Ultimate 3.0 64GB is a fast storage device -- well over twice the speed of the best that USB 2.0 has to offer, in fact. This speed is particularly welcome for the larger capacity thumb drives that are becoming popular, such as the 64GB unit we tested.

The Kingston DataTraveler Ultimate 3.0 is a chunky USB 3.0 thumbdrive with a good turn of speed and capacity up to 64GB

Both flash storage and USB 2.0 are everywhere in modern gadgets and computing. Put them together, though, and you won't see the full potential of flash. Until recently, USB was responsible for slowing down your storage transfers — USB 2.0 is the real bottleneck which severely restricts how quickly you can transfer data to and from thumbdrives and memory sticks.

Kingston's DataTraveler Ultimate 3.0 lifts the USB 2.0 restriction by offering a USB 3.0 plug on one end of its fat body. And with a theoretical (read: illusional) speed of 4.8Gbps, there ought to be enough bandwidth to accommodate any current storage media.

Depending which end of the cable you're looking at, the new-style USB 3.0 plug can look identical to the most common USB 2.0 plug (aka, Type A) — except its visible plastic bits inside are coloured blue.

And since the USB 3.0 standard is backwards-compatible with USB 2.0, this stick should work on any modern PC, albeit at slower speeds over USB 2.0.

Its power demands are higher than normal, we found. We tried the Kingston DT Ultimate 3.0 in the USB hub ports of our desktop keyboard, and found it wouldn't power up, where USB 2.0 flash sticks work just fine here.

A Y-cable is included in the pack, which should enable you to use the drive on even underpowered USB 2.0 ports, providing you have two positioned close together to play with.

The Kingston DT Ultimate 3.0 is available in 16, 32 and 64 GB capacities. It's in the latter capacities that a faster link should prove especially welcome, in order to fill the drive with files and folders without being left waiting.

As we hinted earlier, though, the DT Ultimate 3.0 is no sylph-like model, measuring 16mm thick, when many USB memory sticks are less than half that size. Given the small physical size of flash memory, we can only guess that the bulk of the device is filled with controller electronics for the USB 3.0 interface.

For too-closely spaced USB ports on a computer, you may need to use a USB extension cable to enable it to squeeze in without blocking other peripherals' plugs. And therein may lie a problem.

If you use a regular USB extension cable, such as the one included with the Kingston DT Ultimate 3.0 itself, you'll find the connection drops back to USB 2.0 speeds, even on USB 3.0 ports.

USB 3.0 extension cables are now becoming available, but can be relative expensive and hard to find at present.

The Kingston DT Ultimate 3.0 feels well made, constructed from white plastic with brushed aluminium side cheeks. A matching cap slips over the business end to keep out dust, and this is ‘handed' so only fits one way; with no markings outside to help orient it, you must look inside the cap first to see which way round the pieces fit together.

The cap also fits over the rear of the Kingston DT Ultimate 3.0 stick, so you can clip it there when in use — providing you haven't taken advantage of the lanyard hole on the main body to lash the drive to a keyring, for instance.

We tested performance of the Kingston DT Ultimate 3.0 64GB with both USB 3.0 and USB 2.0 connections.

In the ATTO Disk Benchmark running on Windows 7, the Kingston DT Ultimate 3.0 reached a maximum read speed of 83 MBps, with write speed a little slower at 69 MBps.

We'd normally crosscheck with HD Tune Pro too, but our copy of the benchmark software is not compatible with USB 3.0. Instead, we tried CrystalDiskMark 3.0.

In this test, the drive reached a maximum sequential read speed of 90 MBps and write speed of 72 MBps. Meanwhile 4 kB read and writes were handled at 5.8 and 7.3 MBps, respectively.

Over a USB 2.0 connection, the Kingston DT Ultimate 3.0 unsurprisingly performed much slower: in ATTO, data reads reached 35 MBps, while writes fell to 28 MBps.

These represent very good working speeds for USB 2.0, about the best we've seen for the older protocol in fact.

While these lab results show that this USB 3.0 drive far outstrips USB 2.0 devices, the intrinsic top speed is comparable only to that found on a traditional hard-disk drive. Much higher speeds ought to be possible from the union of flash memory and USB 3.0.

Whether the slowdown originates from the drive's controller or from the use of slower NAND flash is not clear; but flash media can potentially triple the top speed we saw in the USB 3.0 tests.

In a real-world test in Windows 7, we tried filling this 64GB stick up. When we tested a 64GB USB flash stick from Corsair, the Flash Voyager, we found noticeably poor write speeds that prevented quick top-ups. Based on its synthetic benchmark results, we calculated that to fill that particular stick would take in excess of three hours. And a subsequent real-life test suggested a time closer to six hours.

In the case of the Kingston DT Ultimate 64GB, we were able to fill the drive with 60GB of data (comprising 1.4MB data files) in 55 minutes. This real-life example suggests a transfer rate of just 18 MBps. That's a very poor result for Windows 7 whose cause we are still investigating.

Compared to USB 2.0 flash drives, the Kingston DT Ultimate 3.0 64GB is a fast storage device — well over twice the speed of the best that USB 2.0 has to offer, in fact. This speed is particularly welcome for the larger capacity thumb drives that are becoming popular, such as the 64GB unit we tested. It could be even faster though, much faster in fact, given the combined potential of flash and USB 3.0; maybe we'll have to wait for the next generation of such devices to truly tap into those possibilities. Beware of the DT Ultimate 3.0's unit's physical size — if you're in a tight spot and are trying to squeeze the drive between other USB 3.0 ports, you'll need to find a new USB 3.0 extension cable if you don't want to downgrade performance to USB 2.0 speeds.