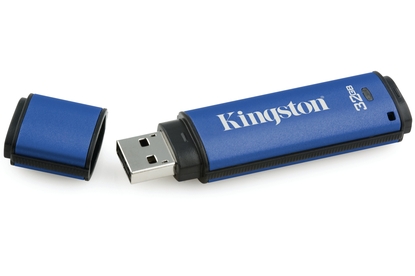 If security is a must, Kingston's DataTraveler Vault - Privacy Edition is a good choice. However, if you aren't backed by corporate or government funds, this is one expensive USB flash drive.

As portable USB flash drive storage capacities continue to rise, the possibility of losing a lot of data in one hit becomes more worrying. While there are no flashing lights, laser grids or barbed wire to suggest that the Kingston DataTraveler Vault - Privacy Edition is different to other USB flash drives, the drive comes with 256-bit AES encryption. If you lose your drive your data will still be safe from prying eyes.

Apart from the bold "Vault Privacy" lettering on the underside of the drive, it resembles the DataTraveler 150 without the Spiderman suit. Like the DataTraveler 150, it is slightly chunky for a USB flash drive, which means you might have trouble accessing adjacent USB ports when it's plugged in.

The 256-bit AES encryption employed by the drive is also used by Maxtor's BlackArmor portable hard drive and has been ratified by US government for use with both unclassified and potentially classified information.

All of the available storage on the drive is encrypted, so you can't accidentally transfer a file to an unprotected portion of the USB flash drive. The drive is also protected against brute force attempts to break the password, and will automatically reformat itself after 10 unsuccessful password attempts. You can securely format the USB flash drive at any time through the settings dialog.

The Kingston DataTraveler Vault - Privacy Edition is extremely fast, able to write 20GB worth of 3-4GB files at a rate of 12.2 megabytes per second (MBps), and read the same data at 28.5MBps. It also handles small files well. In our benchmark tests, it wrote 3GB worth of 1MB files at 5.5MBps and read them at 23.6MBps. It performed a simultaneous read/write operation of the same files at 4.8MBps.

The DataTraveler Vault - Privacy Edition's closest competitor, Corsair's 32GB Flash Voyager provides data encryption, but it only encrypts the USB flash drive in 4GB portions and it's not government-grade.

The Kingston drive is twice as expensive as Corsair's offering, and unfortunately you don't get the rugged shell of the Flash Voyager. But if data security is your primary concern, Kingston's DataTraveler Vault - Privacy Edition wins hands down.