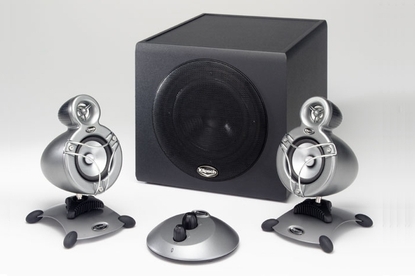 The ProMedia GMX are a great set of speakers with excellent reproduction across the entire audio spectrum.

Klipsch make some of the sexiest home theatre and 2.1 PC speakers on the market. Their website is an audiophile's wet dream with a wide array of speakers catering to just about any audio usage you can imagine. When we got our hands on the ProMedia GMX we were interested to see if form and design were the primary focus of this company with performance and quality taking a back seat. Thankfully, Klipsch are true to their word, producing a set of speakers of extremely high quality with only the slightest of flaws, only mentionable when really trying to pick out something to complain about.

As far as design goes, these speakers are the very definition of the word sleek. Looking like two turbine jet engines, they scream audio at the listener, crystal clear and with very little distortion at high volume levels. The pre-amp pushes the volume to almost uncomfortable limits and it is only as your ears begin to bleed that the distortion kicks in.

The system is comprised of two speakers, an enormous sub-woofer and a pre-amp. The cabling detracts from the aesthetic of the system but can't really be helped lest the designers resort to wireless technology. The speakers are mounted on ball joint which give them the ability to be rotated a full 360 degrees while also being tilted at a wide range of angles. A simple feature and one that some would argue as being a gimmick, we found it to be rather useful as the speakers could be pointed to an optimal listening position.

We tested the treble with some high pitched tunes such as Radiohead and Portishead as well as the squealing Theremin of Howard Shores Ed Wood theme and found that all were clearly reproduced without any loss of pitch in the upper registers. Each satellite speaker sports a superior tweeter which is no doubt responsible for the treble quality we witnessed in our tests.

Mid tones across all our tests were flawless with clear separation between instruments even when handling a dirty guitar, notorious for enveloping most everything that it accompanies.

When testing bass we assaulted the unit with some heavy R&B tracks as well as the White Stripes' Hardest Button to Button. The pre-amp allows the master and bass levels to be adjusted and, like most sub-woofers, the bass could only be adjusted to about half full volume before becoming uncomfortable to listen to due to heavy distortion. This high level bass distortion was to be expected but we soon discovered something else - vibration.

Even though it is a very minor problem, we found that the bass was subject to some unwanted vibration from within the unit making some heavy bass to have a slight metallic vibration in the background. At low bass levels this wasn't as prevalent and as such we assume that the woofer either isn't properly affixed to the chassis or is vibrating on the desk we had it sitting on. If this is the case, sub-woofer feet like those on the Roth AudioBlob would have been perfect; elevating this unit to the best speaker system we have seen.

As it stands, the unit delivers an incredible audio experience and is well worth its rather exuberant price tag. This is a high end speaker system and delivers in high end style.