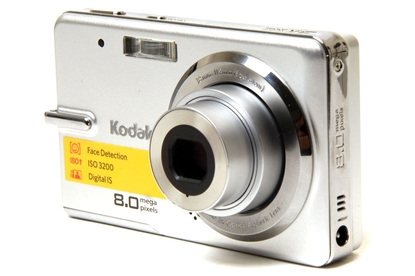 While the design and feature set are fairly attractive, the Kodak EasyShare M883 unfortunately suffers from the same image quality issues that plagued its predecessor. If you're making small prints and want a simple to use point-and-shoot then this may be a reasonable choice, but otherwise you should probably look elsewhere.

Kodak's M series is touted as a bit of an all-in-one photography solution, providing high megapixel sensors with a load of useful features and a slim, stylish design. Their M883 is no exception to this, packing in an 8.1-megapixel sensor, face detect and digital image stabilisation into a smooth chassis. However, the images leave a little to be desired and at times operation can be sluggish, both of which hold this model back from a higher rating.

When looking at this model's predecessor, the EasyShare M873 we found the picture less than satisfying and were hoping the issues would be rectified this time around, but unfortunately that is not the case. The same haloing and image noise issues that plagued the EasyShare M873 are back here in full force.

Imatest gave the model a score of 0.264 per cent for chromatic aberration, which is quite a poor result. There was prominent haloing scattered across the entire image, particularly concentrated on high contrast edges and in outdoor shots with strong ambient light.

Similar results were seen in our sharpness test, with the M883 achieving a good but not great result of 1421. Our pictures were a little soft at times but looked perfectly crisp at small and medium print magnifications.

However there was a reasonable amount of image noise that did detract from the overall clarity of the shots. Imatest gave this model a score of 0.97 per cent for noise, and continuing the above theme this is slightly higher than we normally see. When studied at their full resolution our test shots were rife with very fine noise, giving them a slightly grainy look. As above this won't be an issue unless you're making large-sized prints.

Colour reproduction was similarly mediocre. Colours came out a little underexposed at times, but they were quite strongly saturated and looked pleasing. Imatest awarded a score of 9.73 for colour which is satisfactory but not an outstanding result when compared to other cameras we've reviewed.

In most of our speed tests the M883 performed adequately, but there were a few exceptions. The shutter lag was a fairly speedy 0.07 seconds and we had no complaints about the 2.1-second shot-to-shot time, but the three-second power up could have been improved a little. Our real complaint was with the basic operation of the camera. For example, focusing takes anywhere from a third of a second to over a second depending on the subject. Similarly there is quite a hefty delay between when you take a shot and when you can open the menu.

Features wise the M883 is fairly standard for a mid-range compact model. It has the now-expected face detect focus mode, as well as ISO and white balance presets. ISO sensitivities extend to 3200, but we wouldn't recommend shooting above ISO 400 unless you're a fan of a little graininess. There is digital image stabilisation, but it is the poor cousin of optical image stabilisation and is of limited use. The burst mode operates at about 1.8 frames per second and there are a handful of other image options such as sharpness and colour as well.

Kodak is sticking with their tried and true design style here. The matte silver colour scheme and slightly boxy design is a little plain, but some users will like the minimalist style. The controls are comprised of a thumbstick along with a smattering of buttons and the interface is extremely simple to use making this a great novice camera.