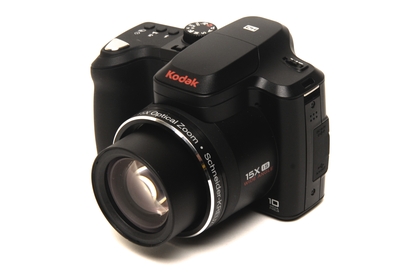 Kodak's Easyshare Z1015 IS is a fine ultra-zoom camera for users looking to upgrade. It has some image quality issues and takes a while to start up but its overall performance was pleasing.

Kodak's Easyshare Z1015 features a 15x optical zoom, advanced shooting features and all the bells and whistles you expect from an advanced compact camera. It is a relatively strong performer, although its images suffer from some annoying flaws.

The main problem with the unit was its colour reproduction. Colours were strongly saturated and not particularly accurate. We tested on both the natural and vivid colour modes but neither gave satisfactory results. Exposure was also a little problematic, with a slightly darker tone than normal across most of our shots.

Our test shots were about as sharp you would expect from a 10-megapixel camera. They were a little blotchy at times, but only in patches of fine detail; nonetheless they should produce good prints at most sizes. Chromatic aberration was also well controlled, with very little in the way of haloing or purple fringing and minimal detail loss towards the edges of the frame.

The camera's noise performance was not outstanding. ISO 100 and ISO 200 produced fine shots, while at ISO 400 there was a little colourful speckling evident but it wasn't too problematic. It wasn't until ISO 800 that we saw a drop in clarity; beyond this setting the shots became largely useless.

In our speed tests the Z1015 IS did well, with the exception of a sluggish 3.7 second start-up time; this is somewhat understandable given it is an ultra-zoom camera. The camera's shutter lag was much better, clocking in at a very speedy 0.05 seconds, and the shot-to-shot time was almost as impressive at 1.8 seconds. The burst mode snapped a modest two frames per second.

The camera's feature set is quite robust and should suit people looking to upgrade from an old compact. It offers all the standard manual controls, including aperture, shutter and program priorities, as well as face detection and image stabilisation. The 15x optical zoom lens is the most impressive part of the package as it has a 28mm focal length, allowing quite a bit of creative shot taking.

The camera is big, boxy and not particularly stylish. The controls are a little fiddly: there is a single scroll wheel that you push in to change mode and then scroll it to select settings. It can get a little annoying and we would have preferred the addition of a second wheel.