A high-definition camcorder from Kodak that fits in your pocket 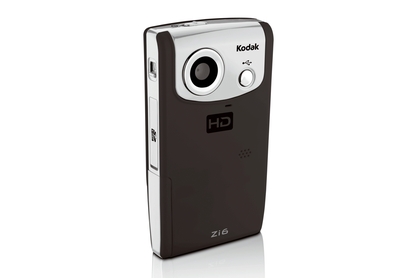 The Kodak Zi6 is anything but Z grade. It offers impressive HD image quality and some interesting extras, including variable framerate options. For the price and size, it's a winner.

For a pocket camcorder, Kodak's Zi6 Pocket Video Camera has a tonne of features and shoots video with surprisingly bright colours. It won't replace your full-sized camcorder or rival such a camcorder's feature set, but it does offer characteristics unique among the current crop of pocket HD camcorders.

The Zi6 combines a lot of things we love about Pure Digital's Flip MinoHD — a flip-out USB connector for direct-from-device uploads to YouTube and for offloading clips to your computer, dead-easy controls, and relatively good video quality — with a few extra tricks that trump Pure Digital's popular gadget, such as the ability to toggle between macro and landscape modes and the presence of three video-shooting modes and a still-photo mode. Still images captured with the Zi6 aren't much to look at, but having the option to snap a photo is still nice.

The three video modes all record as H.264 .mov files: a 60-frames-per-second HD mode (720p), a 30-fps HD mode (also 720p), and a standard-definition VGA mode that takes lower-resolution clips with a smaller file size. In still mode, the Zi6 captures 3-megapixel images with its CMOS sensor; stills are a bit better than what you'd get with your average cell-phone camera, but don't expect stunning, high-res shots that you can crop and edit.

The Zi6 is slightly bigger than pocket camcorders such as the Flip Mino HD, the Creative Vado HD, or the Sony Webbie HD MHS-PM1, but it's still very pocketable. It's about the size of an old Palm Pilot, versus the Flip's iPod Nano-sized frame. Even though it's an all-plastic body, it also feels pretty durable in the hand — a bit heftier than the plastic-and-metal Flip Mino HD. However, all the ports, covers, and doors on the Zi6 mean it could be a bit more susceptible to damage when it's dropped.

For a basis of comparison, we shot the same footage side-to-side with both the Kodak Zi6 (at the 30-fps HD setting) and the Flip Mino HD. The Zi6 showed some interesting differences in well-lit indoor settings — its colors looked more vivid in the source .mov file.

The following clips are the results of my side-by-side tests; these embedded clips are standard-resolution, low-quality YouTube clips, but clicking the "HD" button at the bottom right of each video will give you a better idea of each source clip's quality.

The Zi6 repeatedly produced more vibrant colours in video clips. However, sometimes colors were a bit too vivid to the extent of looking blown-out. There was also visible noise in the footage when the player window was maximised; quite a bit more grain was visible than in the Flip Mino HD's raw .mov footage.

When shooting in "landscape" mode with the Zi6, subjects closer to the lens were also a bit blurrier and more out-of-focus than they were with the Flip Mino HD. Switching to "macro" mode did help, but close subjects were still a bit blurry.

In test footage shot through a window during daytime, colours were much more vibrant with the Zi6, especially in terms of brightening subjects that were in shadowy areas.

Ratcheting the Zi6 up to 60 fps in HD mode made a big difference. Footage was much smoother, and colors remained brighter than they appeared when shooting with the Flip Mino HD. Again, uploading clips to YouTube has a noticeably negative effect on video quality, but the source file showed smoother video than what you'll see in these clips.

In general, test footage with the Kodak Zi6 had an edge over that of the Flip Mino HD in terms of vivid color, especially indoors with both fluorescent lighting and sunlight in the scene. The Zi6 also did a better job at making subjects lurking in shadows more visible.

On the flip side (pun retroactively intended), the Zi6 produced more jagged distortion on sharp, high-contrast edges, and it didn't have the cleanest focus for subjects that were between macro range and a few feet from the camera. The Flip Mino HD seemed to produce smoother video, with a less-colourful and more cinematic look. In short, we liked the Mino HD's overall image quality better.

The Kodak Zi6 has minimal on-board storage: 30MB, which is enough to store only a few still shots. Instead of storing your video footage in the camera, you store it in a bring-your-own SDHC card (an SDHC card slot is on the side of the unit). An SDHC card can store up to 32GB of video footage, but you'll have to factor in the cost of purchasing such a high-capacity card if you don't have one already.

It's simple enough to power up and start shooting video without even looking at the manual. A four-way joystick sits under the LCD screen on the back. Pushing the joystick down starts and stops recording, and snaps pics when you're in still-photo mode. Pressing the joystick to the left or right toggles through the 60-fps HD, 30-fps HD, VGA, and still modes, while pressing it up and down activates the 2X digital zoom. A playback button sits to the right of the joystick, and a delete button sits to the left of it.

The top of the Zi6 houses the power switch, while the left side of the device has a landscape/macro switch, a covered SDHC slot, and the battery compartment door. On the right side is the flip-out USB connector, as well as composite and component ports for viewing HD and standard footage on your TV. On the bottom of the Zi6 is a tripod connector and a place to attach the included wrist strap.

The Zi6 runs on two AA-size batteries, and two rechargable nickel-metal hydride batteries come with the unit, as does a battery charger. You have to remove the batteries from the Zi6 to charge them; the battery charger is a bulky wall-socket unit that can charge both AA and AAA batteries.

Shooting video with the Zi6 is as easy as it is with other pocket camcorders, but the 2.4-inch-diagonal LCD screen makes framing your shots and playing them back a slightly more pleasurable experience. Every other pocket camcorder we've seen has a noticeably smaller screen. The Kodak Zi6's bigger display is bright and crisp enough to see straight-on in bright sunlight, but it is noticeably harder to make out what's on the screen at side angles.

All in all, the Kodak Zi6 is a good option for those who want a pocket camcorder that offers more control over your video than what the Flip offers, as well as those who like the use of removable storage. Its feature set is solid, it gives you more control over frame rates and image quality than other pocketable models we've tested, and its colors look bright.

At US$180, it's $50 cheaper than Pure Digital's Flip Mino HD, which makes it a smart buy. Just be sure to factor in the cost of a high-capacity SDHC card if you don't have one already, and don't rule out the Flip Mino HD if you want a more cinematic look for your videos. If you're looking for the best video quality, period, the Creative Vado HD offers the best we've seen in a pocket camcorder. And for the same US$180 price, the Sony Webbie HD MHS-PM1 has a great feature set, as well.

Note: the Kodak Zi6 is not currently available in Australia and can only be purchased through overseas retailers.