The full-featured Kodak Zi8 pocket-camcorder captures the best HD footage we've seen, but its interface and digital zoom often get in the way. 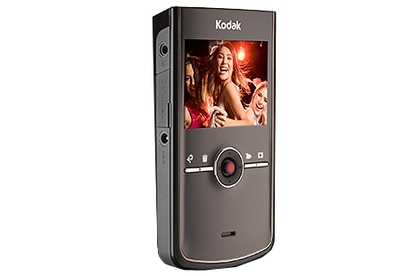 The full-featured Zi8 captures the best HD pocket-camcorder footage we've seen, plus it has shooting options galore. Tere are some interface and key usability issues and digital zoom often get in the way.

NOTE: This product has not yet been released in Australia. All prices in review are in US currency, when Australian pricing is released we will update accordingly

Kodak's Zi8 high-definition pocket camcorder (US$180 as of 9/14/2009) is the superpowered follow-up to the company's cult-favorite Zi6 model. It's also the most full-featured pocket-size camcorder we've seen, thanks to three unique features: the ability to record 1080p full-HD video, digital image stabilization, and a microphone-in jack that lets you use standard headphones or earbuds as an external mic.

It fulfills its promise in at least two of those three areas, offering superb video quality and versatile audio options. Quite simply, test footage shot with the Zi8 in 1080p mode is the highest-quality video we've seen in a pocket camcorder to date.

The Zi8 also serves up a range of shooting options. In addition to the 1080p setting (1920-by-1080 videos recorded as .mov files at 30 frames per second), you can also capture images in a number of resolutions and frame-rate counts: 720p at 60 fps, 720p at 30 fps, 848-by-480 standard-definition WVGA video, and 5-megapixel still photos. That's a wider range of options than some full-size camcorders offer, let alone most pocketable devices.

You'll need a high-capacity SDHC card to get the most out of the Kodak Zi8; it doesn't have an internal storage drive like the Pure Digital Flip line of pocket camcorders. In 1080p mode, the .mov files are a bit bulky — about 90MB to 100MB per minute of footage.

The microphone-in port on the side of the Zi8 is also a nice addition, especially for guerrilla journalists who'd want to use the Zi8 for "man-on-the-street" interviews. The port is the same size as a standard headphone or earbud jack, which means you can use earbuds as makeshift, stereo lavalier microphones. The on-board microphone on the front of the Zi8 is also decent; a bit of background hum is in some wide-angle shots, but it definitely picks up far-away sounds much better than the top-mounted mic on the rugged-but-disappointing Kodak Zx1.

In bright light, the Zi8's footage looks very colourful, sharp, and smooth, and the clips are more vivid in any lighting condition than clips from the Flip UltraHD. Across the board, the Kodak Zi8's video quality clearly outshines that of its predecessor, the Zi6.

Quick still-photo capture is also a strong suit of the Kodak Zi8. In still-photo mode, the shutter fired immediately after pressing the button, so you won't miss much. Face detection is another nice feature: the Kodak Zi8 detects and optimizes in-camera settings whenever a face is in the frame. Image quality, however, was about on a par with that of a decent cell-phone camera.

On top of the Zi8 is another distinguishing feature: a macro/landscape toggle, which certainly does have an effect on the resulting videos and still shots. But the macro mode doesn't handle extreme close-ups very well; text on a business card started appearing crisp only when the card was about 6 inches from the lens. The best still-photo results I saw were in macro mode with the subject about a foot away from the camera.

As for its digital image stabilisation, that feature is hardly noticeable when you're shooting stills: any subtle movement of the camera or subject resulted in a blurred shot. The Kodak Zi8 did seem to produce slightly less blur in video footage shot with a subtly-shaking hand, but don't expect it to create crisp shots if you're bouncing around in a Jeep or running down the sidewalk. If image stabilisation is important to you, you'll likely be disappointed.

Also disappointing is the 4X digital zoom on the Kodak Zi8; it's very jumpy between zoom points when you shoot video, and it even introduces weird artifacts in the resulting footage. This camcorder is best used without zooming; in fact, zooming may ruin an otherwise great clip.

The Zi8 is a standout in terms of connectivity: on its left edge are the microphone line-in, a DC-in port for charging the battery, and covered ports for both A/V out and HDMI (an HDMI cable is included, too). On its right side are the SDHC card slot (you'll need to supply your own SDHC card), the power button, and the built-in USB connector for offloading clips to your PC. A standard tripod mount sits on the bottom of the camcorder, and the Kodak Zi8's slide-off faceplate covers its rechargeable lithium ion battery. The 2.5in LCD holds up well in direct sunlight.

Although its build is all hard plastic, the hardware seems durable enough to withstand a good year or two of being tossed in a bag or purse. Unlike the hard-plastic connector for the Pure Digital Flip camcorders, the Kodak Zi8's connector is rubberised, which allows a little more leeway when you're dealing with odd USB port placements. It's also a bit more durable, but the bendable connector cord would be much more handy if it was an inch or so longer.

The user interface is a cinch to learn, but it suffers from delayed reaction times. I often had to hit the power button more than once to turn on the Zi8, and the small nub that doubles as the capture button and the menu navigation joystick is tricky to use for the large-handed. I also ran into about two seconds of lag when switching between resolution options and other on-screen menu selections. Even more annoying: video capture stopped by itself quite a few times.

In addition to the pea-size mini-joystick that controls the navigation and capture functions, the Kodak Zi8 has four dedicated buttons, for settings (you can adjust screen brightness, view audio levels, turn stabilization on or off, and set the date and time, among other options); deleting; capture; and playback. The controls are easy to use and well-spaced, but I did experience lag when using almost all of them.

If the best-quality footage and shooting options galore are your main needs in an HD pocket camcorder, the Zi8 gets a glowing recommendation. However, I did experience some key usability issues, even if its video quality blows the competition out of the water.