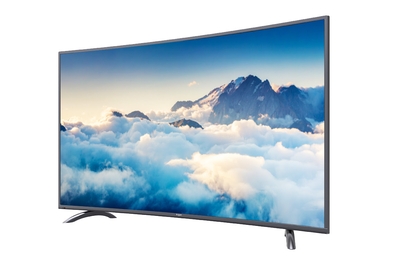 Outstanding value and generally-great picture performance. Kogan is the latest to disrupt the TV market with this relatively-cheap, high-value model. Just note you’ll need a set-top box or media streamer to go with it.

It was only very recently that we were celebrating Hisense’s amazing 4K ULED TV as our Best Tech product of 2016. The traditionally-budget brand’s Series 7000 TV wasn’t just better than all of the competition, it was much cheaper than it all too. Now here’s Kogan with the cheapest, curved, 4K TV on the market and it makes the Hisense range look expensive. Yet we’ve seen good and bad Kogan TVs in the past and bad cheap TVs (like the TCL C1) are quite nasty. So would this be another price/performance revolution or a cheap-but-not-very-cheerful compromise?

First off the TV actually looks pretty good. The plastic bezel is thin and looks better than it feels. The feet do look a bit plasticy on close inspection but most visitors to your home are more likely to be marvelling at the large curved screen than scrutinising its supports. Overall it’s a reasonable tech centrepiece to anyone’s home. Especially if you wall-mount it.

The main benefits of a curved screen are that it (supposedly) helps deflects annoying reflections in a bright room and also that it’s more comfortable to look at as it matches the curve of your eyeball. There’s something positive to be said for both claims, but if you’re watching the screen from an off-center position, it will look a bit distorted rather than more-comfortable.

The remote is nothing special to look at but the large buttons and corresponding functions are very responsive. They’re also well labelled, intuitively laid out and there aren’t too many of them. All good.

What’s missing, and this is reflected in the price, is the intelligence: this is not a Smart TV. While there is a built-in digital tuner, you don’t buy a 4K TV to watch relatively-poor quality broadcast television. The good news here is that there’s no shortage of decent set-top boxes and media streamers on the market including the Fetch TV Mighty (or Mini), Apple TV, Google Chromecast Ultra or whatever. You’ll need a 4K-compatible unit to make use of the 4K panel so factor in a few more hundred dollars if you don’t already have one, but at least you get to choose what system to use.

The Kogan has a decent (but not complete) set of modern ports – there’s no Ethernet (or WiFi) or PC connector. There are four HDMI ports (one of which is ARC compliant) a full set of component audio/ video connectors and optical S/PDIF out for a sound bar. There are also two USB 2 ports. The latter plus two HDMI ports are connected from the side but the rest are downward facing and tricky to access.

We plugged a small USB 3 hard disk in and it was recognised quickly, along with all of its content. It played back most standard videos quickly and competently. It didn’t recognise DVDs per se but it did play the video (VOB) files in their folders – albeit with the wrong language. It said our 4K mp4 video file was unsupported so don’t expect it to play everything you throw at it. However, we were generally very impressed with the speed of navigation and loading times of all the files that it did play. You can also use storage like this as a PVR to record TV.