Online retailer Kogan has released a 3G Android tablet for less than $200. But is the Agora HD Mini a case of cheap-and-cheerful or just plain cheap? 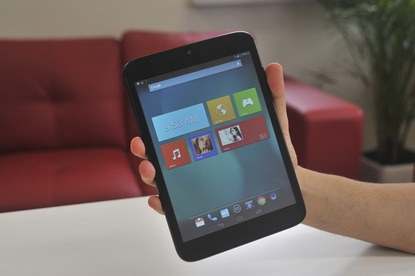 The Agora HD Mini is poorly constructed and delivers an outdated version of Android on a primitive screen. However, equipped with 3G connectivity and priced at $199, it radically undercuts its rivals and practically caters to an audience unopposed. For those in need of a cheap 3G tablet, then the Agora HD Mini merits consideration.

Kogan's Agora HD Mini is, to date, the cheapest Android tablet to feature 3G connectivity we’ve come across. Even with its $199 price, it still manages to feature a quad-core processor, high-resolution cameras and a strong range of connectivity options. Is the Agora HD Mini a case of exceptional value for money, or does it have a crippling shortfall?

Unboxing the Kogan Agora HD Mini isn’t much of a ceremony. Inside the banal white box is the 7.85in tablet. It has an aluminum case, but the otherwise premium material does little to help with the HD Mini’s appearance.

Pick it up and you'll realise the Agora HD Mini suffers from being poorly constructed. The entire unit creeks whenever you reposition your grip. During our testing, we leaned it upright to watch some videos, where it fell off our desk and onto the carpet. The fall caused the not-meant-to-be-removed panel to snap open on both sides and exposed some of the internal components.

The glass is a filthy fingerprint magnet

There are other design shortcomings. The glass on the front panel is a filthy fingerprint magnet and the screen is clearly inferior to the typical Gorilla Glass modelled by its rivals. Pressing your finger down in the middle of the screen causes it to flex beyond the point of comfort.

In a press release, Kogan claims the Agora HD Mini has a resolution of 1024x768 pixels, but our internal testing — which we double checked — revealed it has a lower screen resolution of 976x768. Either way, the resolution won’t faithfully display HD content and, because of the low-resolution screen, it’s easy to spot individual pixels.

Colour articulation isn’t exactly what you’d call faithful. Blacks shine bright and the gamut is limited, but even with all of its shortfalls, watching a movie on the HD Mini is doable.

Power at a price

The Agora HD Mini manages to feature contemporary hardware in spite of its low price. Inside is a quad-core 1.2GHz CPU, 1GB of RAM and 16GB of internal storage, with the option of expanding storage through microSD memory cards.

This hardware powers an almost stock Android 4.2 Jelly Bean operating system (OS). It’s a couple of generations behind the latest Android 4.4 KitKat OS, and ongoing software updates could be few and far between. Having said that, Android 4.2 is a complete operating system that benefits from vast application support and the kind of supreme functionality that comes from years of development.

Interestingly it has retained the Android dialler

The overall result is a fairly quick tablet. It transitions from one screen to the next with a sense of urgency, and it rarely ever falters. The experience could have been significantly better if the HD Mini had a higher resolution screen. Without it, the tablet maintains its cheap feel.

Interestingly Kogan Agora has retained the Android dialler, and since the HD Mini can take a SIM card, it is possible to use the device for phone calls. We recommend using a hands-free or Bluetooth for voice calls, otherwise the loudspeaker is automatically enabled.

A league of its own

The HD Mini gains a competitive advantage by offering compatibility with 3G (HSDPA) networks. No other tablet to our knowledge features cellular connectivity within range of its $199 price. Google’s Nexus 7 with 3G starts at $429, while Apple’s iPad Mini with 3G starts at $639. When compared to its rivals, the value of the Agora HD Mini becomes a lot more obvious.

The Agora HD Mini also features Wi-Fi 802.11n and Bluetooth 4.0. Bordering its top is a range of uncovered ports, including a microSD slot, a microUSIM slot, a Micro-USB charger and a 3.5mm auxiliary port.

Powering the Agora HD Mini is a large 4500 milliamp-hour battery. On paper, we’re impressed by its capacity. After a full charge we managed to watch a two hour movie (on maximum brightness), browse the Web, make use of social networks, take photos and videos, and even make a phone call. Unfortunately we did experience one mishap.

During our testing we rebooted the device as part of the process to enable a SIM card. We captured screenshots of the battery’s performance — which still reported 60 per cent remaining — before turning it off. When we immediately restarted the tablet, the battery had dropped to just 15 per cent. This was a one-off occurrence and the possible result of hardware failing to communicate with software.

The Agora HD Mini scores points by including high-resolution cameras. The front is graced by a 4.9MP camera, while the back features an 8MP camera. Impressively, both cameras can record videos at 1920x1080 resolution.

...it leaves a lot to be desired

These specifications are much more attractive on paper than they are in real life. Both the front and rear cameras struggle to articulate colours accurately. More often than not, bright colours are rendered in dull hues. Furthermore, the captured photos were quite noisy, which means if you were to view the image at its original size, it would be blurry. Images taken in low-lighting suffered most as the rear camera would increase the brightness at the expense of clarity.

Taking photos with a tablet is already a chore. The large form factor makes holding the tablet and capturing a photo difficult. The HD Mini suffers more than most with its slow autofocus and heavy 389g body.

We think most people will appreciate the front-facing camera if they make video calls over Skype and other VoIP applications. Although not the clearest camera, its high resolution will prove advantageous.

The Kogan Agora HD Mini is poorly constructed and delivers an outdated version of Android on a primitive screen. In terms of creating an enjoyable user experience, it leaves a lot to be desired. However, equipped with 3G connectivity and priced at $199, it radically undercuts its rivals and practically caters to an audience unopposed.

For those in need of a cheap 3G tablet, then the Kogan Agora HD Mini merits consideration, but if you’re content with Wi-Fi alone, then the Google- and Asus-made Nexus 7 delivers a better overall experience starting from just $229.