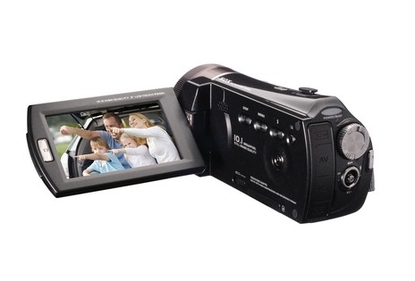 The Kogan Full HD 1080p Touchscreen Video Camera is an incredibly impressive camcorder for the asking price. It represents a perfect introduction to high-definition video (especially if you're tightening your purse strings this Christmas).

Just in time for Christmas, the Kogan Full HD 1080p Touchscreen Video Camera has made its way through our Test Centre's doors. As its name vaguely insinuates, this latest gadget off the Kogan production line is a high-definition camcorder equipped with a touch-screen LCD (who would have guessed!) It records HD video to removable flash memory and comes bundled with an 8GB SD card, so you can start making movies straight away.

The most impressive thing about the Kogan Full HD 1080p Touchscreen Video Camera is its $369 price tag, which is frankly a bit bananas. That's roughly a third of what you'd normally pay for a high-definition camcorder (even budget models like the Sanyo Xacti HD1010 cost $1000 or so). The only competing HD camcorders in this price range are the Millennius Memmoir (which has similar specifications) and inferior 'pocket cams' such as the JVC GC-FM1 and Memorex MyVideo HD.

The Kogan Full HD 1080p Touchscreen Video Camera is a handsome camcorder — especially when its bargain-basement price is taken into account. Its 129x51x48mm dimensions are complemented by a black, glittery finish that reminded us of the $1699 Canon Legria HF20. On first impressions, you certainly wouldn't suspect this was a dirt-cheap camcorder — even the Kogan logo seems more stylish than usual. However, upon further inspection we did notice a few concessions, including a flimsy battery door and cheap connectivity flaps. Nevertheless, it remains a well constructed product for the asking price.

The Kogan camcorder's much-touted touch screen did a surprisingly good job. We rarely entered the wrong menu by accident and never had to tap the screen more than once. Kogan has also included a traditional joystick on the back of the camcorder which serves the same function (so if you don't like touch screens, you don't have to use it). The menu layout could definitely do with some improvement, however; it consists of a confusing array of symbols that are sure to deter beginners. This is something that the Millennius Memmoir also suffered from.

When it came to image quality, the Kogan Full HD 1080p Touchscreen Video Camera performed about as well as can be expected from a $369 HD camcorder — in other words, it's good, but not great. We tested the device under a variety of lighting conditions and played the footage back on a Pioneer KURO PDP-C509A plasma TV. Colours were sharp and accurate in our outdoor test shots, but the picture quality became noticeably grainy in dim environments. (Still images suffered from the same problem.) That said, anyone who buys a Kogan Full HD 1080p Touchscreen Video Camera isn't looking to produce award-winning video. For the asking price it's as close to perfect as you can get.

We have awarded the Kogan Full HD 1080p Touchscreen Video Camera 4.5 stars out of five due to its fantastic price. Based on video quality and features alone, a score of 3.5 would be more on the money.

The Kogan Full HD 1080p Touchscreen Video Camera can only be purchased through the official Kogan Web site. Visit www.kogan.com.au for more information.

[Note: The Kogan Full HD 1080p Touchscreen Video Camera is now $299, which makes it even better value than at the time of release.]