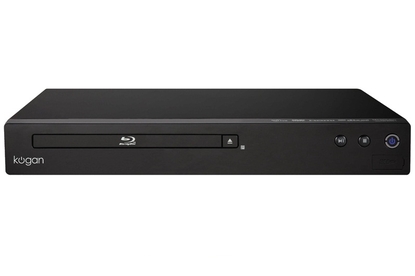 The Kogan Blu-ray Player Slim might be pint-sized, but it still packs plenty of features beneath the hood. It will make an ideal secondary Blu-ray player for the bedroom, as well as an affordable entry point into HD video.

The Kogan Blu-ray Player Slim (AKA Kogan Blu-ray Player Slim BD 2.0 Full HD 1080p) is an ultra-compact BD player that packs plenty of functionality into its petite body. Highlights include Blu-ray Profile 2.0 support, DVD upscaling to 1080i, a front-mounted USB input, DivX video support and region-free DVD playback. It will make an ideal secondary Blu-ray player for the bedroom, as well as an affordable entry point into HD video.

Costing just $150, the Kogan Blu-ray Player Slim is cheaper than some standard-definition DVD players — but the real drawcard is its eye-catching size. Measuring just 280x38x225mm, it’s one of the smallest Blu-ray players on the market. Indeed, it makes the PlayStation 3 ‘Slim’ (325x98x274mm) look decidedly portly by comparison. The unit is very attractive for an entry-level Blu-ray player; one thing’s for sure, it puts its bulky predecessor to shame.

The Kogan Blu-ray Player Slim can be viewed as a scaled down version of the Kogan Blu-ray Player Full HD 1080P (Profile 2.0) — in size and function. While most of the features found on its big brother remain, Kogan has removed some of the connectivity options, presumably due to size restrictions. This includes component video outputs, optical digital audio and 7.1 channel analog audio out. To be honest, we don’t think these connections will be missed by the average Kogan Slim owner — most people will simply use HDMI for all their audio/video needs. On the plus side, all the top-level audio formats can still be decoded, from regular Dolby Digital all the way up to DTS-HD.

The Kogan Blu-ray Player Slim sports the same menu interface as its full-sized sibling. The menu is surprisingly attractive for an entry-level Blu-ray player, with an intuitive and responsive layout. The remote control isn’t too shabby either.

The USB port lets you view videos and photos, and play music. Supported file formats include AVI, AC3, MP3, AAC, JPEG, BMP, GIF, MPEG, AVI and DivX. This is particularly useful if you regularly download videos online and would like to watch them from the comfort of your couch. An Ethernet port is also included for BD Live downloads, although you can’t stream Internet content, such as YouTube videos.

To test the Kogan Blu-ray Player Slim, we watched the Blu-ray version of Terminator Salvavtion on a Pioneer KURO PDP-C509A plasma TV over HDMI. We didn’t encounter any flaws while watching the movie (well, apart from the plot holes), and suburb image quality was exhibited throughout.

Colour balance was flawless, and we didn’t notice any ghosting or image tearing during the fast-paced action scenes. We also pitted the Slim against the Kogan Blu-ray Player Full HD 1080P (Profile 2.0) in a side-by-side test; both models gave a similarly impressive performance.

Standard-definition DVD playback was equally solid. We watched the lobby scene from the Matrix and were more than satisfied with the level of detail on display. The 1080i upscaling seemed to give our DVD an extra dash of colour, although it naturally fails to match a fully fledged Blu-ray disc.

The Kogan Blu-ray Player Slim took around a minute (57 seconds) to load our copy of Terminator Salvation. We have seen faster results from other Blu-ray players, but it remains on par with most of its budget-level competitors.