It's hard to believe Konami's vampire hunting franchise has been around for 20 years. 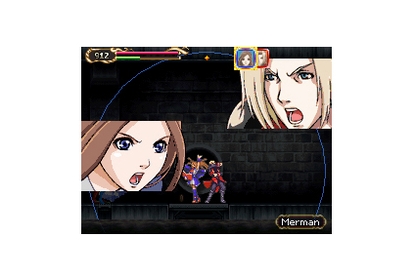 It would have been easy for Konami to be lazy and release an underwhelming remake or compilation to celebrate its 20th anniversary. Instead, they released Portrait of Ruin, a game that not only reaffirms the series' greatness, but is easily once of the best handheld games released this year.

It started as a simple feud — the Belmont clan against Dracula — but its now evolved into a grand tapestry that comes to dizzying fruition with Portrait of Ruin.

Dracula's Out to Lunch

First things first: although it's a Castlevania game, Portrait of Ruin (PoR) doesn't follow in the footsteps of its predecessors. First, Dracula is nowhere to be found — the story is focused instead on another vampire named Brauner. Also, the main characters aren't named Belmont: Jonathan Morris, who is the son of the main character from Castlevania: Bloodlines, and Charlotte Aulin star in this title. Each character possess unique abilities — Jonathan, for example, excels in melee combat and Charlotte is a spellcasting wiz — and you can choose to control one character at a time or have both on the screen at once. It's important to call on the one that not only best suits your objectives but also your style of play.

We should also mention the updated multiplayer mode: you can play co-op locally or through Nintendo's Wi-Fi connection. You also have the opportunity to buy or sell items found in the game through Shop mode. Regardless, the multiplayer component is impressive enough that you'll keep Portrait of Ruin in your DS long after you've beaten the game.

All these changes make for a better game, but the genius of PoR is that it retains the elements that made the previous titles so much fun. Despite the removal of the touch screen functionality, the core gameplay is still a total blast and upgrading weapons and abilities keeps things from getting dull. The only real complaint we had with PoR is that the process of reloading a game once you've died is incredibly inconvenient.