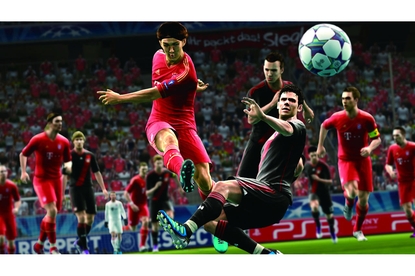 If you’re a serious fan of soccer, this is probably the better game compared to FIFA 12, especially if you can organise a social league with friends.

In recent years, Pro Evolution Soccer (PES) games have struggled to compete against the FIFA juggernaut. First, it was a matter of unlicensed, fake player names (the bane of all footy fanatics) against FIFA's 'real' players. Now, they’re licensed — just not as many. FIFA 12 has an astounding number of leagues and teams to choose from, where PES focuses almost exclusively on a handful of (major) European championships.

And where FIFA has aimed to be accessible to all — at times flirting with being an arcade experience rather than a simulation at all — PES games have been skill-heavy titles for the hardcore soccer fan. Predictably this has relegated the game to the benches in terms of sales.

It’s likely to be a case of history repeating itself this year; I just can’t see PES knocking FIFA 12 off its lofty perch. That’s a pity in many ways because, though developed on a clearly smaller budget, PES is in many ways the better football game.

It’s all about the on-the-field action with this game. Player movement is smooth and slick. The sheer range of ball control movements and tricks requires an encyclopaedic knowledge of buttons that rivals a fighting game. And the result is, when you pull off a perfectly timed through ball to open up an easy goal, an incredible thrill.

Indeed, if the crowd wasn’t so ugly (a constant reminder that this is just a game), then the atmosphere of PES 2012 would be something special. The sounds of the fake crowd and the ball bouncing around the pitch are amazingly authentic.

Even the commentary is reasonable. Though Konami seems to have given up in trying to match up the comments made with what is happening in the actual game, at least they're not obnoxiously enthusiastic like we see in many other sporting games.

It’s just as well that the on-field action is so much fun, because the menus and game options are rather thin. There’s also only a pittance of international teams available, so if you don’t follow the European leagues, you’re immediately left behind in terms of finding a team to relate to.

There’s also no real manager mode with the same depth of a FIFA game, which says a lot, because the FIFA management modes are themselves casual-orientated and threadbare. There’s really very little sustained content in the game to engage with.

Redeeming this for the sake of replayability are the game's online modes, which are robust and quite entertaining. There’s solid matchmaking, so newer players are unlikely to run into the OCD-level talents of PES’s best players. It’s worth playing one of those once just to realise they make South Korea’s Starcraft players look like Just Dance party gamers, but after that it’s nice to know you can settle into something that won’t result in 10-0 losses.

Then there are some neat Facebook applications to build custom leagues with friends and stat tracking. That part of the game is wonderfully addictive, and the more PES-owning Facebook friends you have the better.

So big props to Konami for really upping the ante with the social side of Pro Evo '12. FIFA 12 will still be the single player’s game of choice, but for the committed soccer fan, the rewards really are there this time around in PES, which in this humble critic’s opinion is a big step forward for the series.