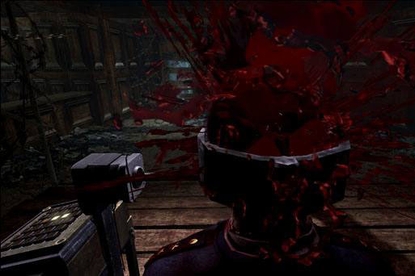 Saw II's set-up should be instantly familiar to fans of the annually released fright-fest: Dropped in an elaborate maze of traps and puzzles masterminded by spooky series' antagonist Jigsaw, you're tasked with saving your ass from a gory end. Specifically, Saw II takes place between the first and second films, and puts you in the unlucky shoes of the original film's Danny Glover-played protagonist's son. While familiar, the appropriately creepy warehouse setting certainly sells the scares; messages scrawled in blood, old machinery that looks more monstrous than mechanical, moody lighting, and an overall dilapidated presentation do a decent job of snapping your neck hairs to attention. Additionally, the sequel borrows the original's behind-closed-doors surprises, making every doorknob twist like a Russian roulette spin. Simply passing from one room to another can never be taken for granted, as shotguns and explosive trip wires threaten to redecorate the environments with your entrails.

While used a bit too liberally, these tricks manage to keep you on edge, wondering what lies beyond each entry and exit. Sadly, the sequel takes away the first title's ability to use these booby-traps against your adversaries. This table-turning mechanic was one of Saw's cooler defensive tactics, so it's surprising they excised it from the sequel. Saw II also waters down the melee combat significantly. The first game's hand-to-hand encounters were unintuitive and repetitive, but rather than addressing these issues, the sequel simply slaps a Band-Aid over them. The half-assed fix comes in the form of quick-time events, requiring players to thwart rampaging crazies with a few button inputs. I'm not sure this is any worse than the last game's clunky combat, but it's certainly not an evolution, either.

While the occasional death trap and psychopath will chill -- or maybe just mildly cool -- your spine, Saw II's puzzles are much better at fueling the frights. Many are of the simple fuse box fixing, lock picking, and wire matching variety, but still offer an engaging challenge, especially when failure brings instant death. But it's the set piece-driven brain-benders that really tweak your nerves; usually involving the rescue of some poor sap from an intricate death-dealing device, these macabre puzzles truly capture the films' morbid style, while providing authentic heart-in-chest moments. The puzzles themselves aren't any more creative than the ones thrown at you throughout the campaign, but the stakes are driven significantly higher by the presence of terrified victims. Just try and keep your cool when one wrong move could trigger a reverse bear trap around some sobbing woman's head. It's one thing when your own re-spawnable life is on the line, but when you're staring at a man who's eyes are about to be ejected from his skull by a crushing vice grip, it's another story.

When forcing you into these incomprehensible situations, Saw II shows its true potential. These terror-ratcheting rescues make you feel helpless, demanding that you switch on your survival instincts before faced with a gore-drenched outcome. They also capitalise on the films' core concept of teasing our most morbid curiosities. Unfortunately, when Saw II isn't putting someone else's fate in your hands, its limping along on half-hearted scares, shoehorned combat, and tired survival horror tropes. If next year's inevitable follow-up can more effectively leverage the series' strengths while excising all the fright-light filler, I'll happily schedule another date with Jigsaw.