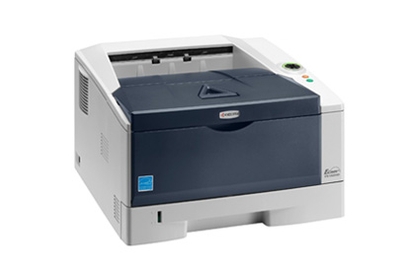 With low running costs, high performance and strong paper handling, the Kyocera Mita FS-1320D could be a brilliant acquisition for businesses seeking fast text output. The lack of network facilities is the only significant flaw, and even this can be fixed by paying a little more for the FS-1370DN.

The Kyocera Mita FS-1320D mono laser printer is unlikely to match the feats of the all-conquering Kyocera FS-C5100DN, but it's a very competitive and flexible printer for anyone who values reliable mono printing over all else.

Unlike the colour FS-C5100DN, the Kyocera FS-1320D is only a mono laser model. But for a great many businesses where crisp text is the priority, the FS-1320D's lack of colour facilities won't prove a problem.

The Kyocera Mita FS-1320D isn't the most attractive printer, and we weren't taken with its blend of dark and pale coloured plastic - business models aren't generally bought for their looks, but single-coloured casing would probably blend into an office environment more effectively.

The Kyocera Mita FS-1320D feels suitably robust, though. Typical of laser printers, its blocky design has a (rather stiff) paper tray built into the bottom, and pages drop neatly into the recessed lid. Sensibly, Kyocera sees no point in changing a tried and tested system.

The control panel isn't as spartan as some we've seen, and while it's not exactly rich with buttons, the Kyocera Mita FS-1320D does have a useful error monitor that lights up in different areas to inform you of the exact nature of any errors that may occur while testing.

A memory card slot is another helpful feature. As a more general point, it's nice to see that Kyocera offer universal drivers for this range of printers, so the same driver can be used on many Kyocera models. This is a pleasing touch that should help ensure swift driver upgrades for new operating systems etc.

As a general rule, though, it's still better to use dedicated drivers where possible, so as to get the most exact match. When we tried them, the universal drivers didn't offer the smoothest duplex support, for example.

The Kyocera Mita FS-1320D isn't an expensive model, but it's not the cheapest mono laser we've seen either - the Samsung ML-1915, for instance, retails for around $100. That means you can expect a little more in the way of versatility and features from the Kyocera. The meaty main paper tray can hold up to 250 sheets of paper, and you can also load up the multi-purpose tray with as many as 50 sheets.

Should you want additional paper handling, you can bolt on up to two additional 250-sheet trays at around $200 a time. A possible 800 sheets makes this a potentially very capable model - and pushes it into territory occupied by far more expensive models, such as the Oki MC361.

A USB interface is provided, but network support isn't built-in as standard. Facilities can be added later, but these options aren't cheap - wireless support, for example, will set you back almost $480. It is perhaps a bit surprising that there are no network facilities, given the printer's focus, and office workers may be more tempted by an enhanced model, the FS-1370DN, which adds ethernet and an improved display for an extra $50 - $70

The Kyocera Mita FS-1320D offers good speed, generating pages of text at the rate of 26.1ppm in standard mode. This isn't so far from the 35ppm quoted by Kyocera, and makes the FS-1320D extremely fast in real-world terms - many considerably more expensive colour models fall considerably short of 20ppm in mono mode.

Text isn't the sharpest we've seen, but is still reasonably bright and well-defined, and will be very satisfactory for all but the most finnicky of users.

Double-sided printing was available at the rate of 14.8ppm. Given that this is as fast as the single-side mode for many printers, it makes the FS-1320D's duplex facilities extremely practical (as well as economical).

The Kyocera Mita FS-1320D's 7,200 sheet toner cartridges cost just $125, which means that the printer will cost you less than 1.7 cents for a page of text, making this a model should prove extremely cheap to run.