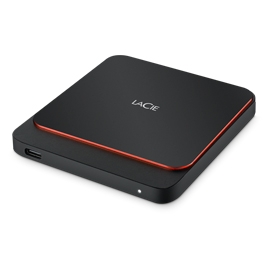 This is a LaCie hard drive that’ll get the job done but it doesn’t make a particularly strong case for why it should be the SSD you go with over the other options.

Following on Seagate’s own super Fast SSD last year, the company’s LaCie sub-brand now has its own solid-state storage solution in the form of the LaCie Portable SSD. It’s not especially different to what the storage company have gone before but if you’re after that modern portable SSD experience, it’s got the goods and then some.

When it comes to design and form-factor, there’s not a whole lot to be said about the LaCie Portable SSD. It’s literally a reskinned version of the Seagate Fast SSD that swaps the silver palate for black and copper accents.

On one hand, it’s hard not to see this as a little lazy. On the other: why reinvent the wheel when it isn’t necessary?

After all, back when we reviewed it, we came away reasonably happy with the look and feel of the Seagate Fast SSD. In our review at the time we said that although the storage device was “not without a few rounded edges of its own, it makes for a sharp looking contrast to the cool metallic design of its Samsung-branded rival.”

The only real physical feature worth noting here is the single Thunderbolt 3 USB Type-C port on the bottom-end of the unit. If you’ve yet to embrace the next-gen data transfer standard, fret not. LaCie have also included a USB Type-C to USB 3.0 cable in the box.

Of course, the thing that matters most here is performance and when it came to performance, the LaCie SSD compared well against Samsung’s T5. Asked to transfer 31GB of high-quality image and video files over a Thunderbolt-enabled USB 3.0 port from itself to a connected PC, the LaCie Portable SSD accomplished the task in much the same time as the Samsung. It scored 1 minute and 33 seconds. Samsung’s T5 came in at 1 minute and 30 seconds.

As narrow as a margin as that is, that’s still one point to LaCie.

When it came to transferring that data back from the desktop to the SSD, it scored considerably slower. It took 6 minutes and 17 second to seal the deal. The Samsung completed the same task in 3 minutes and 37 seconds. During this phase of our testing, the transfer speed for the LaCie SSD dropped as low as 30mb/s and only went as high as 120mb/s - far short of the T5’s consistent 290-320 mb/s. Keeping score: that’s 1-1.

Since you’re going to get the best performance out of the LaCie Portable SSD using a proper Thunderbolt-friendly USB Type-C cable, that’s where the second half of our testing focused. In these circumstances, it took the LaCie Portable SSD just a 1 minute and 45 seconds to move our standard 31GB test folder onto itself and then 1 minute and 34 seconds to move it back off. During this period, it managed a fairly consistent transfer speed of about 360mb/s, even rising as high as 410mb/s at times.

By contrast, the Samsung T5 managed the same task in 2 minutes and 34 seconds and 1 minute and 30 seconds, respectively. All things considered, this puts the LaCie lightly ahead when it comes to performance.

What’s Not So Good About The LaCie Portable SSD?

As mentioned before, the LaCie Portable SSD really does feel like the Seagate Fast SSD with a paint job. And it’s not like there was no room for improvement to be explored with the latter. On its own merits, it’s fine. But in the context, it  feels a little eh. There’s nothing here that really contributes to any sort of broader identity or tone for this product beyond a person who needs SSD storage and nothing exciting to latch onto.

In addition, when transferring data over traditional USB, we encountered a fair amount of inconsistency around transfer speeds - which often made the LaCie Portable SSD just that little bit less practical to use than the other options.

Finally, the pricing for the LaCie isn’t quite as competitive as it ought be. Pretty much across the board, Samsung’s T5 range has it beat. See below:

The LaCie Portable SSD boasts a good form-factor and, assuming you’re planning on transferring content via USB Type-C, offers up nothing short of the high performance you’d expect. That said, this confident combination is somewhat let down somewhat by iffy pricing and bland design.

This is a LaCie hard drive that’ll get the job done but it doesn’t make a good case for why it should be the SSD you go with over the other options.