Security program Ad-Aware is now a decade old, and vendor Lavasoft calls its new version of Ad-Aware the Anniversary Edition. 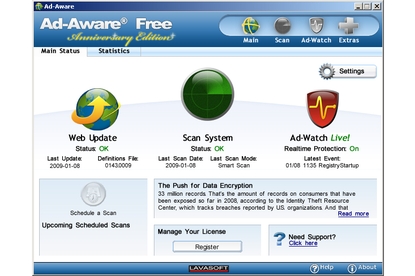 Earlier versions of Ad-Aware promised protection against viruses, spyware, Trojans, and other pests. New in the full Pro version of the Anniversary Edition is a heuristic, or behaviour-based, search for these pests.

Thanks to the new Ad-Watch Live feature, which constantly monitors your system, future malware might have more trouble invading your PC.

There are more new features. Scans for malicious software can now be customised in profiles; they can also be carried out on external drives. The new Lavasoft Toolbox allows you to observe all running processes, and it can send suspicious files to Lavasoft. After Ad-Aware scans and removes spyware, all remnants of the infection, Lavasoft claims, should be cleared. In addition, Ad-Aware has now been fully integrated into the Windows Security Center.

Despite the addition of more features, Lavasoft claims that Ad-Aware Anniversary Edition is much more efficient and resource-friendly than its predecessor. According to Lavasoft, the Anniversary Edition consumes 74 percent less memory than Ad-Aware 2008, and CPU utilisation during a scan has been dramatically reduced.

Lavasoft's in-house study compares Ad-Aware Anniversary Edition with its competitors from Symantec (Norton 360), PC Tools, Kaspersky, and AVG. Lavasoft's entry is in second place with memory consumption at idle and in third during real-time monitoring (Norton 360 is the clear winner in each of these), but Ad-Aware consumed the least memory during a scan. In terms of CPU utilisation, Ad-Aware was the most efficient. In terms of scanning speed, PC Tools beat Lavasoft.

The Lavasoft Ad-Aware Anniversary Edition is available in a stripped-down Free version, a Plus version, and a Pro version.

The Pro version has all features installed. The Plus version lacks the new Lavasoft Toolbox, the scanning function, and real-time protection for network drives. The Ad-Watch Live function is also slightly reduced in Plus.

The Free version lacks protection against over 2 million pests; it is not a full-fledged antivirus software replacement. In the Free version, Ad-Watch Live has been further restricted as well: Real-time Registry monitoring and heuristics are completely gone. It's no surprise that technical support and schedulers are also missing from the free version.