Leica's D-LUX4 is a stylish digital camera for enthusiast photographers looking for something small yet feature-rich. 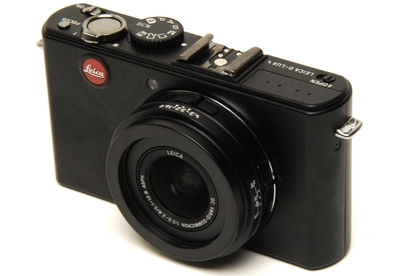 Leica's D-LUX 4 looks very stylish and it takes clear and natural-looking photos. It has good speed, plenty of manual settings, and its scene modes are very useful. However, you do have to forego a sizable chunk of your income to procure it.

Leica's D-LUX 4 10.1-megapixel compact digital camera has plenty of style but doesn't forego functionality. It's more advanced than a basic point-and-shoot camera. The camera caters to serious users who want a break from carrying a D-SLR, but still want the ability to accurately control the exposure.

What's interesting about the Leica D-LUX 4 is that the first time you see it, you could be forgiven for thinking it's a D-SLR, mainly because the lens sticks out and has a silver ring, which hints that you could possibly take it off and replace it with another focal length. However, the D-LUX 4 has a fixed lens with a 24-60mm focal length and an aperture range of f/2 at the widest point and f/8 when fully zoomed in. It has physical switches that allow you to change the focus mode (auto, manual or macro), as well as the aspect ratio of your photos (4:3, 3:2, 16:9).

The D-LUX 4 resembles an old 35mm film camera; it's plain on the front, but the top has the mode dial, zoom lever and shutter button, a focus button, as well as a concealed flash and a hot-shoe. The hot-shoe can be used for an electronic viewfinder in addition to a flash; both are optional accessories. A hand-grip is also an option.

The rear of the unit looks more like a typical compact digital camera: it has a 3in LCD screen; a 5-way controller; a mode button; focus lock, display and delete buttons; and a joystick for navigating the 'quick' menu system. As you can see, we haven't mentioned anything about dedicated dials for aperture and shutter control, nor a manual focus ring. Instead, the D-LUX 4's aperture, shutter, and manual focus functions can all be controlled by the joystick on the rear of the camera. And it's actually very easy to use.

We took most of our test shots in manual mode, and were rewarded with crystal clear images that exhibited almost no chromatic aberration, although there was some in high-contrast areas where bright white met darker colours. Lens distortion was exhibited on the vertical plane while the lens was at its widest point, and it made objects look wider at the top than at the bottom, depending on the angle we took the picture from.

This wasn't a turn-off, and in fact you can take some interesting looking close-up shots with this effect. If you'll be focusing on people instead of objects, be careful not to shoot from angles that give them big heads, but you'll be glad to hear that their skin tone will look natural and that colours won't be oversaturated.

The optical zoom on the D-LUX 4 is only 2.5x, so it's definitely not a camera for bringing far away subjects close to you, but it's suitable for landscapes and portraits, and it also does a good job for macros. It has a reasonable depth of field for a compact camera, which renders the background with a nice but not overbearing blur while keeping your close-to-the-camera subject in focus.

Framing pictures using the 3in LCD screen isn't an ordeal, as it's bright and high-quality. However it is hard to view in very bright conditions (this is why the electronic viewfinder is an option). In addition to shooting in manual mode, you can select from up to 24 scene modes. These range from long exposures to aerial photos (with a warning not to use your camera during take-off and landing). Our favourite scene modes were film grain and pin hole. The latter automatically added vignetting to the corners of our images, and it looked quite nice. Shutter priority, aperture priority, and program modes are available, as well as two custom modes.

In low-light conditions, the Leica D-LUX 4 performed admirably. It has built-in optical image stabilisation, so you can use a slow shutter speed and not rely wholly on fast ISO speeds. This is just as well because even at ISO 400 noise was noticeable in our images, especially when viewed at their full size. However, even when zoomed out of the image, noise from high ISO speeds manifested as discolouration in difficult areas such as shadows. It's probably best not to go over ISO 200 and to not go slower than a 1/25th of a second shutter speed when holding the camera. We achieved good results when using this shutter speed without using a tripod.

Automatic face detection and autofocus tracking are available, and they worked reliably in well-lit environments. Manual focusing is a bit of a chore, as you have only a small square in the middle of the LCD screen in which to focus your image, rather than the entire LCD screen. While the screen itself is of high quality, manually focusing is still a tall order as it is hard to see the end result clearly. It's best to stick to automatic focusing.

Overall, the Leica D-LUX 4 compact digital camera is a very nice piece of kit. It looks very stylish, and it takes clear and neutral-looking photos. It has good speed, plenty of manual settings, and its scene modes are very useful. However, you do have forego a sizable chunk of your income to procure it.