At first glance, the Lenovo Skylight is exactly what the netbook should've been. 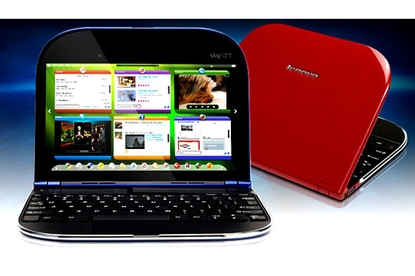 The challenge here lies in finding the right market for the device. Despite the smartbook title, the Lenovo Skylight isn't so much a new niche, as a re-imagined netbook. This one just happens to focus on the always-on, perpetual connectivity that the "net" prefix should have implied.

Instead of slapping a pared down OS on to low powered hardware, the Lenovo Skylight approaches the widget-centric internet we've grown accustomed to on our mobile phones, armed with a full-sized keyboard and clamshell design.

Technically, it's an oversized smartphone. Announced at CES last week, the Lenovo Skylight is powered by 1.8GHz Snapdragon processor, with built in Wi-Fi and 3G mobile broadband. Its 10.1in HD screen offers 1280 by 720 resolution. And despite being a featherweight at 885g, the machine felt sturdy, with a solid hinge and chassis.

The full-sized keyboard is typical Lenovo-fare: comfortable, roomy keys made our admittedly limited typing session a pleasant one. The track-pad wasn't as responsive as we would liked, but we were told that this iteration would change before the Lenovo Skylight unit starts to ship in April.

Tucked beneath the included USB storage stick are slots for a micro-SD card, and a SIM card. Insert a SIM card from any 3G-ready GSM provider, and you'll be up and running on their 3G network.

The Lenovo Skylight will ship with 18 web gadgets, encompassing much of what the internet has to offer. These run along a dock at the bottom of the screen, and include access to Amazon's MP3 store, GMail and Google Maps, Facebook, or Firefox. If 18 widgets aren't enough, we were told that Lenovo will be releasing the platform's SDK - expect enterprising developers to pad that list soon enough. The device also supports normal web browsing, so standard web apps will work just fine.

The Lenovo Skylight offers 20GB of flash storage, and an additional 2GB of free online storage. If you'd like a bit more room, you'll have to rely on USB keys (the included storage stick can be replaced with a typical USB key), though there is an SD card slot, and an additional USB port.

The Lenovo Skylight will gather media stored across formats and display it on the appropriate widget, re-populating the library as USB keys and the like are removed. If 10.1 inches isn't enough screen real-estate, a mini-HDMI output port is included, for piping your media out onto a larger screen.

The Lenovo Skylight will retail in the US for US$500. It will also be subsidized by phone carriers, but pricing wasn't available at the time of our demonstration. Sadly there's no word on it being launched in Australia at this stage.