Lenovo's ThinkPad Edge 13" is a great little laptop for anyone who wants good performance and battery life in a mobile form factor but doesn't want to spend over $1000. There aren't really many things to dislike about this model, and there are plenty of things to love, such as the excellent input devices and the ability to charge your USB devices even when the notebook is powered off and unplugged.

Lenovo's ThinkPad Edge 13" is a 13.3in business laptop that looks unlike most ThinkPad notebooks. It has a glossy screen, raised and rounded keys and a two-tone colour scheme, and it doesn't have some of the traditional features we expect on a ThinkPad (such as a screen-mounted keyboard light). There is good reason for this — it's designed to be an inexpensive, yet very portable machine with good performance and battery life. For the most part, it succeeds in meeting these goals.

The ThinkPad Edge 13" weighs about 1.75kg with a 6-cell battery and it has a sprinkling of ports along its sides, including three USB 2.0 ports, a headset port (combination headphone and microphone port), Gigabit Ethernet, HDMI, VGA, and an SD card reader. You won't find an expansion slot or a fingerprint reader — those are options for more expensive notebooks. At $999, the ThinkPad Edge is inexpensive for what it offers; in fact it includes a lot of features that make it a very worthy model for any type of user.

Both a touchpad and a TrackPoint device are installed. We think this is a great idea, as the TrackPoint is very handy when using the notebook on your lap. The touchpad is wider than usual and it supports multiple inputs, so you can use gestures to zoom and rotate photos. The buttons for the touchpad and the TrackPoint are soft and don't make a loud clicking noise when pressed.

Perhaps the best thing about the ThinkPad Edge 13" is its spill-resistant keyboard. It's rock solid! The keys are isolated (Lenovo calls them "island-style keys"), raised, curved and very tactile. They don't make an annoying noise when you hit them and there aren't any undersized keys. Lenovo has taken out some seldom used keys (such as scroll lock and break, for example) and included only the keys its customers use the most.

The Print Screen button gets its own bit of real estate on the bottom row of the keyboard, which we thing is a great idea. By default the function keys are mapped to tasks like adjusting the screen brightness (if you want to change the volume, you don't have to press the Fn key first, for example). We first saw this type of innovation on the HP Mini 5101, and weren't fans of it, but we've come to see the light. 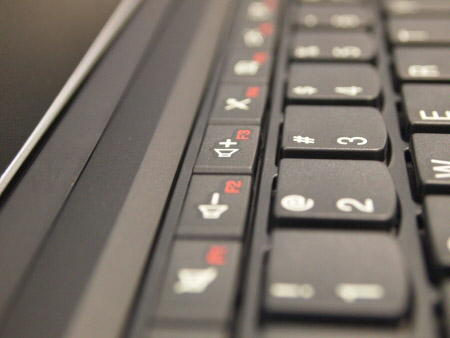 You can change this setting in the BIOS. In a bit of an odd twist, Lenovo has placed the Fn key in the far corner and the left Control key one space inside it. Considering the swapping of the function keys, and the fact most people are used to the control key being right on the corner, this is an inconvenience. However, you can swap these keys in the BIOS. The other key that's in an unnatural position is Delete, which sits three keys in from the top-right corner instead of right on the corner.

A nifty feature that's been introduced on this model is charging over USB. Similar to Toshiba's Sleep-and-Charge ports (found on the Toshiba Satellite T110, for example), the yellow USB 2.0 port on the left side of the notebook can be used to charge an iPhone, Blackberry, Creative Zen, or other mobile USB device. This works even when the notebook is powered off and unplugged from the wall — as long as there is a sufficient charge left in the battery.

A 1.5GHz AMD Athlon Neo X2 L325 dual-core CPU powers the ThinkPad Edge, and together with an ATI Radeon HD 3200 graphics chip it forms AMD's Vision Pro platform. This stipulates that the notebook is good enough to use for business-class graphics applications such as creating presentations with 3D graphics, and also for displaying high resolution videos. It's not powerful enough to run games; it's score of 935 in 3DMark06 is evidence of this. Overall the ThinkPad Edge 13" is fast. Launching and switching programs is swift and you don't notice any lag when watching videos. The 1.5GHz frequency of the CPU might not sound too swift, but in the Blender 3D rendering and iTunes MP3 encoding tests, it actually recorded good times of 2min 26sec and 2min 30sec, respectively. These times are very similar to what Dell's Vostro V13 scored in the same tests (it uses a low-voltage version of the Intel Core 2 Duo CPU).

For storage, the ThinkPad Edge 13" has a 320GB hard drive, which is more than ample for business users, and quite roomy for home users and students, too. It spins at 5400rpm and it recorded an average transfer rate of 22.31 megabytes per second in our tests, which is identical to what the MSI Wind Millions Special Edition U135 netbook recorded. There is no room for an optical drive in the Edge's chassis, nor is there an eSATA port or an ExpressCard slot, but you do get an SD card slot and you can access external storage via the USB 2.0 ports and the Gigabit Ethernet port.

The ThinkPad Edge 13" ships with a 6-cell battery that lasted three hours in our rundown test, in which we loop an Xvid-encoded video while the screen brightness is maximised, the wireless radio enabled and power saving is disabled. This is an above average result for a 13in notebook; it's an hour more than Dell's Vostro 13 lasted with its sealed 6-cell battery. If you use one of Lenovo's built-in power management schemes, you should be able to get a lot more life out of it on the road. 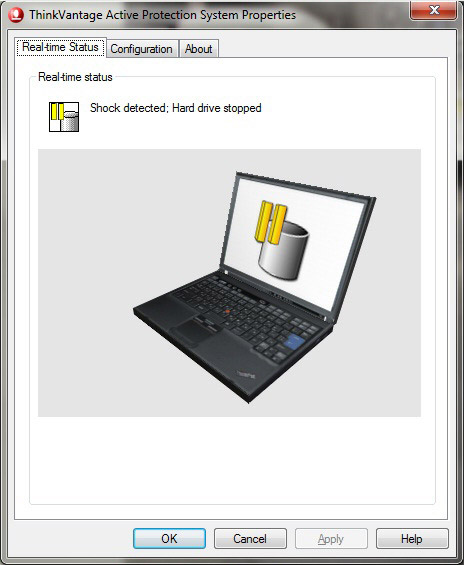 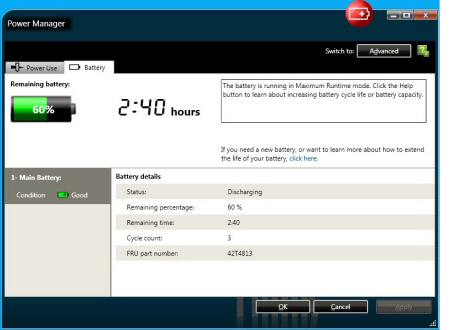 There are some preinstalled utilities, such as Lenovo's ThinkVantage tools, which can help you with backups as well as detect hard drive shocks. The battery utility is also very comprehensive.

The notebook feels strong, even though the lid and the chassis flex a little bit. As mentioned previously, the keyboard is rock solid, and the TrackPoint is also very smooth and tactile. There is a little red LED in the ThinkPad logo on the palm rest, that indicates that the notebook is powered on, and this is something that adds to the overall appeal of the design — there are no bright LEDs above the keyboard or on the front of the notebook. We think the notebook's hinges could be a little stronger, as the screen sometimes changes angle when the notebook is bumped. The screen itself is vibrant but glossy, so you might get annoyed by reflections at times. It has a native resolution of 1366x768, which is wide enough to comfortably multitask.

After a few hours of use, the base of the notebook will get warm — especially if you've been using it on your lap and blocking the base's vents. There is an extraction fan on the left side, but even when the CPU is under a heavy load, it doesn't spin too fast, so overall the system runs reasonably quietly.

There aren't many things to dislike about the ThinkPad Edge 13". It runs well, its keyboard and pointing devices are fantastic, its battery life is above average, and it can even charge your USB devices while it's powered off. We could do without some of the preinstalled software, and also think there should be separate microphone and headphone ports, but these are just minor inconveniences.