A business laptop with good speed, strong build quality and an excellent keyboard It may have a plain design, but Lenovo's ThinkPad Edge E320 is so nice even Mac fans can appreciate it. It's a business laptop with an excellent keyboard and it costs well under $1000 in its standard configuration. However, it could use a better touchpad and screen, and we'd also like a USB 3.0 port instead of eSATA.

The ThinkPad Edge E320 (129834M) is a 13.3in, Intel Core i3-based laptop that's designed for small business users. However, it's a great model for home users and students to consider as well: it has a decent features list, long battery life, it's very comfortable to use and it even looks good. There's not much wrong with this laptop at all, although we think its touchpad and screen could be better and we wish it came with USB 3.0 and a solid state drive as standard (a 128GB SSD is an option).

The Edge E320 is made out of hard plastic that feels soft and rubber-like, yet also quite smooth (and around 10 per cent of the laptop is constructed from recycled material). The unit has an understated design, and even the most determined Lenovo haters (Mac fans) in our office thought it looked good. We think it's one of the better looking Lenovo products and we're glad Lenovo hasn't gone overboard with its design. It's not the same as the first Lenovo ThinkPad Edge that we saw back in Fenruary 2010, but there are similarities, especially with the keyboard.

It's a laptop that feels good to use and it's comfortable to handle. At 1.8kg, it's not super-light, but it also doesn't feel heavy when you carry it around or use it in your lap. It ships with a power adapter that's around 100mm long and 30mm thick, so the whole package provides good portability. The 13.3in screen is held in place by strong hinges and it has a grey trim around the edges, just to make it stand out a little.

With the screen closed, the Edge E320 is about 28mm thick, but the base itself is around 21mm at its thickest point. You won't find an optical drive in the base, but you will find an HDMI port, VGA, Gigabit Ethernet, an SD card slot, a combination headphone and microphone port and three USB 2.0 ports (one doubles as an eSATA port and two of them can be used to charge devices even when the laptop is off). The right side of the base has a vent with a visible, thick copper heat sink and a fan is installed to keep things cool. The fan makes a slightly annoying whirring noise even when the laptop is being used to just browse the Web, and it gets a little louder when the CPU is under a full load.

It has a solid (and spill resistant) keyboard that is one of the best in the Australian laptop market. The keys are large and soft, they possess good travel and bounce, and they don't make too much noise when you hit them. There are a couple of keys in unusual positions though: the Delete key is three spots in from the top-right corner and the Control key is two positions in from the bottom-left corner. The BIOS allows you to swap the position of the Control and Function keys, allowing Control to become the corner key.

Other things that we like about the keyboard include the dedicated Print Screen key, the little Page Up and Page Down keys, which sit just above the left and right arrow keys; the reversed F-keys, which allow you to change brightness and volume and other system functions without having to press the Function key — this can be changed in the BIOS if you don't like it.

In addition to the keyboard, there are many other little details about this laptop's design that we appreciate. The power LED is inconspicuous as it doubles as the dot in the 'i' of the palmrest's ThinkPad logo. There aren't any bright LEDs on this laptop and it's a joy to use at night. However, we do wish that the keyboard was backlit — the spacebar actually has a backlight (or keyboard light) logo on it, but nothing happens when you press it in conjunction with the Function key — it's such a tease. There is no backlight option with this model.

The bottom panel of the Edge E320 comes off easily and we love the fact that the screws are designed to stay with the panel — you'll never lose them. The overall layout of the laptop is clean and all components are easy to access — you can even replace the CPU without too much trouble. There are two memory slots (one free), one 2.5in hard drive bay, a Wi-Fi module (a dual-band Broadcom 2x2 11a/b/g/n Wireless LAN PCI Express Half Mini Card Adapter) and a Mini PCI Express slot. The Mini PCI Express slot can be used to accommodate a solid state drive. 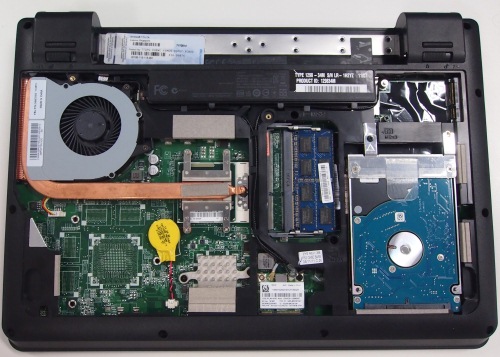 The construction of the ThinkPad Edge E320 is neat and it's a unit with easy-to-access components.