The touch screen on the Lenovo ThinkPad T400s Multitouch is responsive and accurate. It's not just a novelty; it can actually be useful if you're a photographer or designer. We also love the keyboard and build quality of the T400s laptop, but wish the location of some of the ports was more convenient.

With the release of Windows 7 and its inbuilt support for multitouch input and gestures, touch-screen computing is gathering steam. Not only can you get all-in-one PCs with touch screens and tablet-convertible notebooks, you can also get regular notebooks equipped with touch-sensitive displays. Lenovo's ThinkPad T400s Multitouch is one such laptop: it features a 14.1in touch screen that can recognise up to four finger inputs.

The Lenovo ThinkPad T400s Multitouch is a Centrino 2-based laptop with VPro technology. It's aimed at business users as well as anyone else who wants to organise and manipulate files using their hands rather than a mouse or touchpad. While this may seem like it's of little use on a notebook that can't be converted into a tablet and manipulated with a pen, the accuracy and responsiveness of the T400s touch screen makes it a very useful feature. You can use your finger to navigate Windows 7's menu system, launch programs and manage files, as well drag windows to the side of the screen to utilise the Aero Snap feature.

Microsoft's Surface Collage program shows off what you can do when you use multiple fingers. It really is fun to rotate, zoom and move photos around the screen, rather than just clicking through them, and the screen doesn't move back while you tap it. The idea is that design and editing applications will be easier to use with the addition of a touch screen; for rotating and zooming models and images, it's perfect. 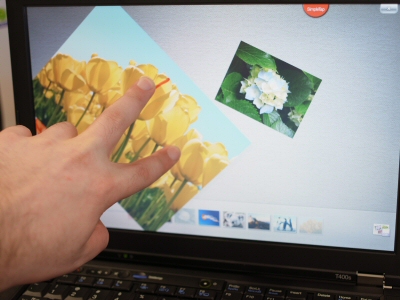 Lenovo includes a utility called Simpletap that lets you use your finger to change various systems settings. You can enable and disable the webcam, change the brightness and volume levels and switch on the keyboard light. 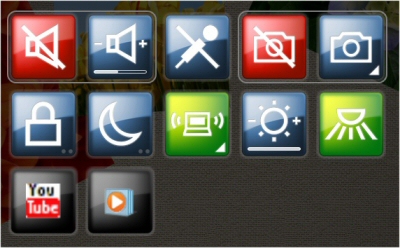 Apart from being useful, Simpletap is fun to use — you can flick the various icons across the screen and watch them bounce around.

The only thing about the screen we don't like is that it seems to be a little dim and hard to view from the sides.

The latest ThinkPad T400s doesn't look too different to the T400s without the touch screen, and this isn't a bad thing — we think the original T400s is a five-star product. The new T400s offers many improvements over previous models, not least of which is the touch screen. You also get a tighter key placement, which reduces the chance of crumbs and other foreign objects slipping between the cracks of the keys (they still will though); there are dedicated buttons for VoIP applications that allow you to mute the microphone as well as adjust the volume; and, most importantly, Lenovo says that the T400s has been optimised for Windows 7.

Lenovo says it has worked hard with Microsoft to ensure that the T400s can boot up and shut down in as little time as possible. Tweaks were made to device drivers such as the wireless adapter, for example, to make sure that it can be enabled and disabled quicker than usual. The thing is, the ThinkPad T400s comes with plenty of preloaded software (Lenovo's own utilities included) that slows it down anyway. In our tests, using the notebook's default settings, the notebook consistently booted to the desktop in 49sec. We stopped timing from the moment the desktop was usable and we were able to launch programs, but some of the ThinkVantage utilities were still loading in the background. Shutting down from an idle state took only 11sec, and this was also consistent. A regular laptop, such as the ASUS UL80Vt, takes 44sec to boot and 11sec to shut down, so it seems the optimisations aren't going to see the T400s beating other laptops in boot-up competitions.

The keyboard is an absolute joy to type on; if you're a touch typist, you'll love it. It feels rock solid and the keys are tactile. However, the keys do have plenty of resistance, so if you type lightly then you might not hit some letters hard enough and will end up with typos. In the middle of the keyboard is a TrackPoint device (otherwise known as an eraser head), which is convenient to use when the T400s is in your lap. A touchpad is also present and it has little bumps on it; at times, these can make you skin crawl (we'd prefer a smooth surface). We love the buttons for the TrackPoint and touchpad devices, as they are soft and don't make a clicking noise when you press them. The keyboard itself is also very quiet — you won't hear any rattling or clicking when you press keys, just a nice dampened thud. All of the keys are full sized except for the Windows key, function and arrow keys.

The build quality of the laptop is second to none; it has steel hinges to hold its screen perfectly in place, the roll cage is made out of carbon fibre, and the palm rest is made out of plastic. There's no creaking when you pick up the T400s from either corner and it takes a fair bit of effort to make the screen puddle when you press on the lid. If you use it on your lap, you will feel some slight warmth towards the rear of the base, but it won't be uncomfortable unless you are doing CPU-intensive work. There is a fan on the left side, as well as a vent, and it's barely audible.

What we don't like about the design of the chassis is the location of the ports. Because there is a built-in DVD burner, most ports have been placed on the back. There is only one USB port on the side of the notebook, and two more on the spine. One of them doubles as an eSATA port and another can also be used to charge an attached device when the notebook is powered down and plugged in to an outlet. It will charge Blackberrys, iPods/iPhones and other USB devices, but we couldn't get it to work with our Creative Zen. Toshiba's Sleep-and-Charge feature is more advanced in that you don't have to leave the notebook plugged in.

You get DisplayPort and D-Sub (VGA) ports for plugging in external monitors and there is also Gigabit Ethernet (an Intel 82567LM chip), 802.11n WiFi (Intel WiFi Link 5100) and Bluetooth.

There is a fingerprint reader on the palm rest, which doesn't get in the way when you type. It can be used not only to log you in to the system, but also to actually boot the computer. Simply swipe your finger and the computer will switch on and log you in automatically, saving you at least one step in the boot-up process. You also get a keyboard light, which is mounted in at the top of the screen's frame and can illuminate the keys when you type.

The ThinkPad T400s is powered by an Intel Core 2 Duo SP9400 CPU with a 2.4GHz clock speed. You also get 3GB of DDR3 RAM, a 250GB hard drive, and an Intel GMA 4500MHD graphics adapter. This configuration mustered a score of 82 in our WorldBench 6 benchmark. Due to a configuration issue it wasn't able to the multitasking portion of the test, so the result isn't a complete one. It would have scored in the 90s had it completed that test. In the CPU speed tests, the ThinkPad T400s produced expected results: it recorded 1min 29sec in the iTunes MP3 encoding test and 1min 15sec in the Blender 3D test. It will be plenty fast for office work and image editing, and will even be able to run some design applications. A faster CPU is an option if you want more performance out of the T400s.

The ThinkPad T400s Multitouch has a 1.8in hard drive rather than a 2.5in model. This helps reduce the weight of the notebook slightly (the T400s weighs around 2kg) and produces less heat. But it also means that disk-intensive operations will suffer. It recorded only 15.58 megabytes per second in our transfer tests, whereas most notebooks with 5400rpm, 2.5in drives record at least 20MBps.

In our video rundown test, in which we disable power management, turn up the screen brightness and enable the wireless radio, and then loop an Xvid-encoded video, the T400s lasted for 1hr 51min, which isn't very long. You can use the extensive power management utility to implement a strategy that will give the laptop more life. 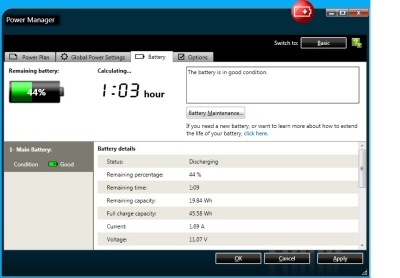 Lenovo's power management utility is comprehensive and should allow you to get a lot more life out of the battery while you're on the road.

The T400s Multitouch is one of the best built notebooks on the market and the addition of a touch screen makes it a much more interesting proposition than the regular version. Its keyboard is solid and a joy to type on, and its multitouch screen is responsive and accurate. It could use better battery life and more ports along its sides. We also wish it had 4GB of RAM and a better graphics card option. Nevertheless, it's an impressive unit with adequate speed under its thin frame and is a great option for anyone contemplating touch-screen computing.