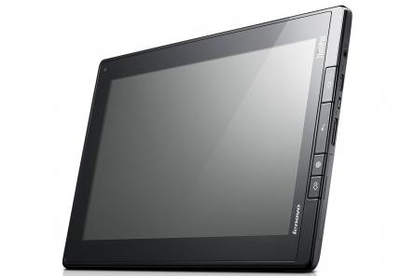 Unlike every other Android tablet on the market, the Lenovo ThinkPad Tablet is a business tablet first and foremost. Its digitiser pen alone makes it an attractive proposition, and it also comes with useful security features and VPN capability. All up, a fine first Android-based effort from Lenovo.

Lenovo's ThinkPad Tablet is the first Android tablet aimed squarely at the corporate environment. Though it still provides all the consumer features Android tablets are well regarded for, the ThinkPad Tablet's included digitiser pen, optional keyboard folio case and dedicated business software makes it an attractive proposition for businesses.

The Lenovo ThinkPad Tablet is a typical business product. It has a boring name, and is described by Lenovo as having the "DNA of a commercial notebook". The ThinkPad Tablet's thick design purposely intends to mirror the company's ThinkPad range of business laptops. Lenovo's says it intended to provide a balance of durability and portability when it came to designing the tablet.

The Lenovo ThinkPad Tablet is definitely heavier and chunkier than most other Android tablets on the market, but the weight doesn't feel overwhelming. We particularly like the rubber-style finish on the sides and rear, which doesn't attract fingerprints. The same can't be said for the front of the tablet, which is fairly glossy and does become a grubby mess after limited use. Lenovo says the use of a glossy screen is due to the fact the display is manufactured with gorilla glass, and this wouldn't have been possible with a matte finish. Still, we would have much preferred a matte screen: the ThinkPad's glossy surface is very reflective both in an office, and in direct sunlight outdoors.

The Lenovo ThinkPad Tablet has square, sharp edges, and physical shortcut keys below the display. The latter is a key feature according to Lenovo: it says that accidentally bumping the edge of the keys will not depress the buttons, avoiding accidental presses. The physical buttons are large and easy to press, and we much prefer them to the software keys on most other Android tablets. The same can't be said about the side mounted power button and top mounted volume controls: they are way too small considering the size of the unit.

The Lenovo ThinkPad Tablet has a full-size USB port on the left side (hidden by a sliding plastic cover), while at the bottom you'll find a headphone jack, a mini HDMI-out port, a micro-USB port and a proprietary Lenovo port for the connection of accessories. A full-sized SD card slot and a SIM card slot (on 3G models) are also on the bottom, behind a small plastic flap. A nice touch is the dot of the letter "I" in the ThinkPad logo on the back: it lights up when the tablet is in use.

The Lenovo ThinkPad Tablet has a 10.1in capacitive touchscreen with a resolution of 1280x800, making it identical to almost all Android "Honeycomb" tablets. The screen is bright and clear, and is responsive to touch. However, as previously mentioned, the glossy surface makes it tough to see in direct sunlight, and even indoors under fluorescent office lighting. The ThinkPad Tablet's screen also has one other annoying aspect: it has small, visible square shapes all over the screen. This imprint appears to be on the layer directly below the outside of the screen and is very noticeable at certain angles, particularly if there is light shining on the screen.

One key aspect of the Lenovo ThinkPad Tablet is the fact that it comes standard with a digitiser pen that sits in the top left corner of the device, much like a stylus. Critically, the digitiser pen doesn't feel too different from an ordinary pen. It has a relatively fine tip, and is comfortable to grip. The pen allows users to take notes straight onto the screen. It supports handwritten text entry, document mark-up and drawing. The ThinkPad Tablet includes the pre-installed Notes Mobile app that is compatible with the digitiser, but users can annotate PDF documents, too. The pen takes some time to get used to, but once you've grasped how to use it, it is reasonably accurate. Its powered by a single AAA battery.

Next page: Software, battery life and other features.