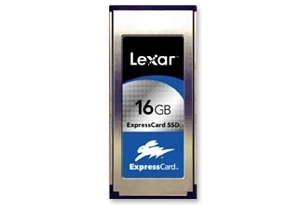 When judged purely as a storage device, the Lexar ExpressCard SSD is found left wanting. However, its large memory capacity and included software features make for a worthy product.

When you need a substantial memory-boost for your notebook, most USB flash drives don't cut the mustard. After all, how much difference can one or two gigabytes really make? By the same token, portable external hard drives are pricey and annoyingly cumbersome, requiring an extra cable and an additional surface to balance them on. This can make train travel quite tricky, unless you happen to have three knees.

Thankfully, the majority of modern notebooks now come equipped with SSD ExpressCard slots, which conveniently combine the best of both worlds. Small and powerful, they offer all the usual benefits of modular expansion, including significant boosts to speed and storage, which can be swapped around and upgraded at will. Lexar's latest addition to the ExpressCard fold touts itself as a high-capacity backup device, capable of improving system performance in Vista machines. This is thanks to the ReadyBoost software included on the drive; a Windows feature that caches data directly to the ExpressCard for much quicker access. Whether it will improve your workflow is questionable however, due to the below average write speeds.

During our testing, we used an Acer Aspire 4920G-3A2G16 notebook equipped with 2GB of DDR2 RAM, a T5450 1.66GHz CPU and Windows Vista Home Premium. As you would expect from a device designed to fit into variously shaped machines, the Lexar ExpressCard did not slide into the Acer's slot particularly well. Those who are unfamiliar with the technology will be initially reluctant to insert the card into the much larger opening; in much the same way you'd balk at tossing a mini DV tape into a VHS player. On the plus side, the card is hidden snugly within the notebook after insertion, eliminating the chance for accidental knocks. (Anyone who has had there USB drive side-swiped by a clumsy hand or rogue passenger will know exactly what we're talking about.)

To assess the Lexar ExpressCard's read/write speeds, we dragged and dropped a folder containing 397MB of JPEG files from the notebook onto the card, and vice versa. It took nearly three minutes (2min48sec) to transfer the files onto the device, which works out at around 2.3MB per second. This is a far from impressive write speed; especially when compared to USB Flash drives, which typically offer a much faster performance. (Lexar's own 4GB JumpDrive Lightning USB Key 4GB model managed the same feat in under two minutes for example.)

When we reversed the process by dragging the folder from the card onto the Acer notebook, the ExpressCard took thirty seconds to complete the task. This is a fair result, though it doesn't make up for the lethargic write performance.

If you can overlook these shortcomings, there is still a lot to like about this ExpressCard; including 16GB of storage space (4GB and 8GB versions are also available), and the special software it comes equipped with. As mentioned above, the device is ReadyBoost-capable, which means you can use its memory to speed up the Windows Vista operating system. Admittedly, the difference barely registers on a high-end notebook, but if you're machine is strapped for memory and underperforming, you should definitely notice an improvement. As an added bonus, this also reduces hard drive access; thus extending your notebook's battery life between charges.

Another neat feature of this ExpressCard is Lexar's NoTouch Backup software. This is an extremely user-friendly tool that automatically backs up the important files on your computer. In a few easy steps, you can set up a schedule that will ensure your data is always safe and retrievable. You can also set filters based on different file extensions, making it easy to find and restore specific data, or choose to back up specific folders.