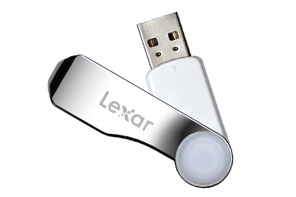 The Lexar 360 is sure to win a lot of fans due to its stylish yet functional design. If you're sick of losing the caps to your flash drives, then the 360 is tailor-made for you.

When it comes to overall design, most USB flash drives fall into two separate categories -- boring and stupid. The former refers to any number of identikit models that have zero personality, while the latter includes everything from plastic fruit replicas to Swiss army knives. It truly is a rare thing for a drive to combine functionality and unique looks in one package, which is why we're so enamored with the Lexar 360 -- finally, an unusual design that actually serves a purpose!

The Lexar 360 is encased in a rotating metal jacket via a sturdy plastic hinge. Rather like a pocket knife, the drive swings out of the jacket during use, and has 360 degrees of rotation. This effectively eliminates the need for a cap, which is a big plus for people who work in a cluttered office or are just naturally forgetful. Indeed, we can't tell you the amount of times we've misplaced those tiny hard-to-find lids, so the lack of a cap is definitely appreciated.

In addition to allowing a lidless design, the swivel mechanic also means that the 360 is noticeably smaller than the typical flash drive. This makes it ideal for carrying around on your key ring, with a built-in loop handily provided for this very purpose. A blue LED light resides under the plastic hinge, hidden from sight. This causes the hinge to light up subtly while the drive is in use; a classy and elegant touch.

Included on the Lexar 360's drive is PowerToGo, an application that lets you store and access Windows-based software from almost any PC. One of the benefits of this application is that you can use Internet Explorer or similar devices without leaving any traces on the computer your 360 is plugged into. All data, including emails, cookies, history and favourites, remain safely on the drive. You can also use the PowerToGo taskbar to add certified programs directly from Lexar's website, including Skype, Google Talk and Mozilla Firefox.

For the security-conscious, Secure II is included on the drive; an advanced security software tool which lets you create encryption vaults and multiple passwords to keep selected documents hidden.

In terms of speed, the 360 reads and writes at a fairly zippy pace. We transferred 450MB of assorted Word documents and JPEG files in one hit, which took a little under three minutes. According to Lexar, the 360 is capable of minimum sustained speeds of 10MB/s write and 15MB/s read; which should satisfy all but the most impatient technophile.