The Interact S605 is Lexmark’s range-topping inkjet multifunction printer for the home office. Boasting a handy SmartSolutions touch screen and automatic duplexing (double-sided printing), this printer is good for basic printing and offers one-touch access to advanced features such as business card scanning and print presets. However, even with these features its high price tag is a bit hard to accept.

The Lexmark Interact S605 inkjet multifunction looks like it's been cheaply made; it doesn't feel especially solid, either. Resembling the bargain bin X4650, the Interact S605 lacks an automatic document feeder or even a front paper cassette. Paper is only fed through a rear tray, so it will need some headroom and can’t be placed in cramped spaces.

The Lexmark Interact S605 multifunction printer provides USB connectivity and integrated 802.11n Wi-Fi, but lacks an Ethernet port. The embedded multi-card reader supports SD, MMC, xD and MemoryStick media, while a front-mounted USB port accepts both PictBridge-compatible devices and USB flash drives. The printer can scan to devices attached to the USB port, as well as print photos and even Word documents and PDFs from them.

Lexmark’s major selling point on the Interact S605 is the touch-sensitive control panel, which replaces the standard array of buttons and navigation pads. As on the Prestige Pro805, the touch-screen interface is largely implemented well, thanks to a vibrant display and quick access buttons which are only visible when a particular feature can be accessed. The screen does require some pressure to register commands, but it works well. 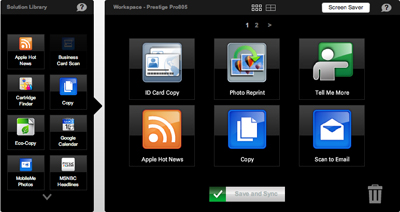 The SmartSolutions Web site lets you configure widgets for your Lexmark printer.

The Interact S605 inkjet multifunction comes with Lexmark’s SmartSolutions feature, which allows you to install widgets. These are configured through a personalised user account on the SmartSolutions Web site, where you can choose from a selection of widgets including RSS feeds, photo viewers and one-touch preset printing preferences. Unfortunately, some widgets like “Business Card Scan” require Windows-only software. However, the ability to configure and deploy the same widgets for more than one printer is certainly beneficial if you have several compatible multifunctions.

The Lexmark Interact S605 is reasonably quick to produce monochrome text documents, and the results are quite accurate. Colour is vibrant, but graphical documents can appear too inky. As a result, text superimposed on a coloured background won't look the best.

Colour photos suffer from a high amount of banding which ruins the look of an otherwise decent image. Black and white photos aren’t fantastic either, as blacks tend to look grey and lack detail. Lexmark doesn’t bundle any photo printing software with the Interact S605 inkjet multifunction, so you’ll have to use third-party software.

The Lexmark Interact S605 provides vibrant scans; it's suitable for scanning photos as well as documents. It can scan directly to e-mail provided the printer is connected to a Wi-Fi network.

A rather high running cost of 23c per A4 page makes the Interact S605 inkjet multifunction an expensive choice in the long run as well as at the register. For the price, you’ll get decent scanning as well as handy features like SmartSolutions widgets, but little that is truly outstanding.