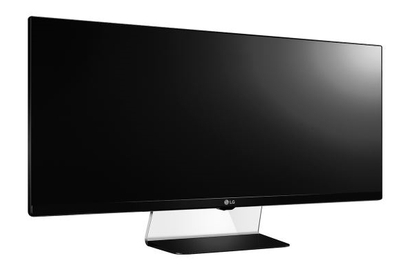 Extra wide monitors such as LG's 34UM67 are a blessing for those of us who love to spread our work out across the screen. There is enough space on this 34-inch, IPS-based (in-plane switching) monitor to not only line up two windows side by side, but even three (or more), while competently multitasking.

It's the major benefit of a screen with a native resolution of 2560x1080 and it should not be underestimated at all. Its ratio of 21:9 may look unconventional to many people used to seeing standard, 16:9 widescreen monitors, but once they realise how much more you can see at the same time while you work, they nod in approval and wish it was their monitor.

You can rid yourself of a second monitor by making use of this type of extra-wide monitor, though you do miss out on being able to angle two separate monitors on a corner desk, for example, for more comfortable viewing. You do get a feeling of being lost in the vastness of this monitor until you can get used to its dimensions, and a curved panel would have perhaps helped to make the user experience immediately more 'immersive'. But that's a minor quibble, and LG does have a curved extra-widescreen monitor in its range, the 34UC87C, which has a higher resolution of 3440x1440, and which also uses IPS screen technology.

The extra real estate that's afforded by the LG 34UM67 over a standard widescreen monitor is a boon for those of us who like keeping multiple windows open and viewable at all times. You can line up browsers, email, office documents, PDFs, photos, keeping what you need in view at all times. If you work with wide spreadsheets, or even multiple spreadsheets, this monitor will help that, too. Video editing benefits greatly from the width of the screen, allowing for long timelines and spacious placement for tools and assets.

Inputs for this monitor include DisplayPort, DVI-D, and two HDMI ports, and you can perform picture-by-picture when you have video sources connected to two of those inputs. LG calls its picture-by-picture mode 'Dual Linkup' in its marketing, but in the monitor's menu it's called PBP. We used PBP mode regularly for our work, as it saved us from having to set up a second monitor for NAS devices or PCs that we wanted to use at the same time as our main desktop, without having to set up another, separate monitor on our cluttered desk. The screen resolution is split in half in this mode (1280x1080), which can be restrictive depending on the work you need to undertake. It's quite a convenient feature apart from that.

Further to office work, the other application for the 34UM67 is gaming, and this is particularly where LG is pushing this monitor. Support for AMD's FreeSync technology is built right into the monitor, meaning that gaming can benefit from faster frame rates that won't burden the picture with tearing. It's a step up from using v-sync, which would otherwise lock the frame rate of the game to 60, and it means that serious gamers should consider this monitor if they want to harness the faster, tear-free frame rates on high-end systems.

We used it with an AMD Radeon R9 200 Series graphics adapter, which also supports FreeSync, via the DisplayPort input. AMD's latest Catalyst driver at the time of writing was installed, after which, the system automatically detected the presence of FreeSync and allowed us to enable it. We could view the effects of FreeSync on the 'Windmill' demo, which shows a static or sweeping view of a windmill in motion, and gives you the option of switching off FreeSync and v-sync to see the difference in motion.

A frame rate of 54 per second was reported by this demo, and the differences between FreeSync and v-sync were not entirely noticeable. It was when we switched off both FreeSync and v-sync that tearing was obvious, but both v-sync and FreeSync showed a rather smooth image. However, this demo also has a test pattern that travels from left to right on the screen, and FreeSync was the smoothest option by far for this test. With v-sync, the image didn't tear, but it lagged across the screen in a stuttering motion. With FreeSync, the image floated across smoothly and free of tearing.

During gameplay, the enabling of FreeSync noticeably reduced the tearing that we noticed when making sweeping moves. Without FreeSync or v-sync, we could immediately see a disconnect between portions of the screen, and especially on vertical lines. When we enabled FreeSync, the same moves reduced the tearing to zero on some of the same reference points, and to minimal on others. In other words, it seemed to work well.

Other aspects of the monitor that are conducive to gaming include a response time of 5ms (measured from grey to grey by LG), and great colour depth, brightness, and contrast. In a dark room, you do notice some paleness at the edges of the screen, but overall, the image is grand. There are various modes that can be selected to put the screen into optimal conditions for gaming, with a main gaming mode that is customisable, as well as in-built settings for FPS and RTS games. Other modes are present for viewing photos, reading documents, and watching movies, with movie mode making the picture soft, photo mode making it sharper, and reader mode making it yellow.

Physically, the monitor has a borderless edge-to-edge look, though there is a frame around the image, and the finish of the monitor's chassis is glossy, a style that doesn't completely befit the price point. There is a 'joystick' under the front lip so that you can access all of the settings, and it's easy to use. You can turn the monitor's power LED indicator off if it's distracting at night. Ports face the rear, except for the second of the HDMI ports, which faces the right side, and the power supply a laptop-style external adapter.

It's a monitor that has a bent for gaming, and pairs best with an AMD Radeon graphics adapter that supports FreeSync, which can help reduce tearing noticeably without limitations imposed by v-sync. But we just think it's a good monitor overall, especially if you want to use it for more than gaming. It's colours and brightness were excellent for viewing and editing photos, and the overall picture quality was sharp and perfectly suitable to everyday work. The ability to line up application windows side by side -- especially document and Web browser windows -- allows for enthusiastic multitasking.