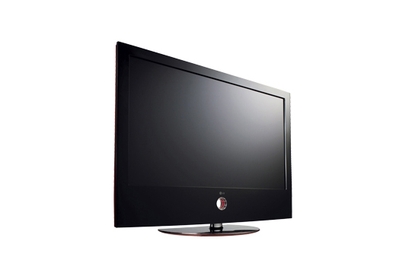 LG's 42LG60FD is a fairly good full HD panel. It's a slim panel with solid image quality but it is missing a few bits and pieces and the design may not suit everyone.

With a sexy slim build and some nifty design features, LG's Scarlet-branded LCD TVs are fairly attractive panels at first glance. With a red back plate and a small hole at the front that runs right through the bezel, they certainly stand out. The image quality is fairly impressive, but there are models that produce a slightly better picture for a similar price.

The unit we tested was 42 inches in size: the 42LG60FD. It is a 1080p full high-definition panel with a native resolution of 1920x1080. One thing clued-in users may notice is the lack of motion enhancing modes such as 100Hz playback, common on high end panels these days. LG do however have another 42 inch model with 100Hz capabilities - the 42LG61YD - so there are other options if this is necessary for you.

Motion performance was one of the areas this panel suffered a little. We found some fast-paced scenes in our high-definition tests felt a little jerky and jarring. Fortunately, there was no ghosting or motion blur to be seen, which should keep sports enthusiasts happy.

We tested using our Xbox 360 games console and ran a variety of HD and SD tests as usual. During HD playback the picture was sharp and detailed, although perhaps a touch softer than on some competing models. Our HD-DVD films looked impressive with minimal noise and no aberrations.

Colours were a little too vibrant in standard mode, but activating the cinema preset helped tone them down and everything looked well balanced. The possible exception here was skin tones: at times they were a little overbearing but they generally seemed to be kept in check.

Black levels were excellent, with deep, rich shadows even in low light. Despite the quoted 50,000:1 contrast ratio, we did at times find a little too much shadow present which slightly obscured detail. This wasn't too problematic, and we were able to minimise it with some calibration using the onscreen menu. Viewing angles were merely alright, with some noticeable colour shift when watching off-centre.

For our standard-definition tests we ran our standard test film, The Matrix, and were very pleased with the results. Artefacts and aberrations were kept to a minimum and there was little in the way of noise. The same slight contrast issues were again present, but colours were well balanced and clarity was extremely good.

As with most high quality modern panels, HDMI ports are available for connectivity. The 42LG60FD sports four of them, which will be great for high-definition enthusiasts. However, it leaves little room for other options, and thus connections like component and S-Video are a little scant.

Design is one of the key features of this screen, most notably the red back. While it does look striking, we find it hard to see how it will fit into a modern home entertainment setup. Furthermore, having only the back coloured means most users will rarely even see it. The other design element of note is the hollowed-out ring at the bass of the bezel, which acts as a power button and decoration. It changes colour depending on the current function and looks a little weird but some may appreciate it.