A stylish 42in plasma television from LG 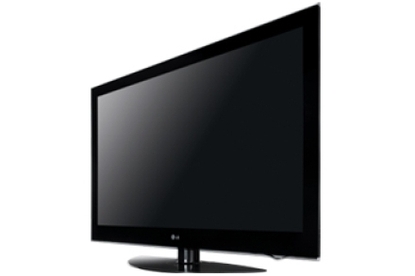 If you’re after a simple television for watching free-to-air TV, Blu-ray discs or Foxtel, the LG 42PQ60D will suit you well. It is not well suited for use as a large computer monitor due to its resolution, but for most people this plasma screen is a good package.

The LG 42PQ60D is a mid-level 42in plasma television with great contrast and brightness. Due to a non-standard resolution it struggles when displaying input from a PC, but for standard- and high-definition digital television and Blu-ray discs it performs well.

A frameless, continuous-glass design with a thin black bezel surrounding the screen looks stylish and modern, with the additional advantage of making screen cleaning a breeze. No dust gathers in the screen’s front bezel and fingerprints come off with ease, making the LG 42PQ60D a good choice if you’re in a dusty or child-filled household.

Two HDMI and component inputs are the chief connectors on the rear. VGA, composite and PC audio inputs are also available on the rear, and we were pleasantly surprised to see HDMI, composite, S-Video and a USB host port on the television’s left side. The USB port supports the usual MP3 and JPEG formats, but it is great to see standard-definition DivX support as well. This is a boon for Internet-savvy users and home video enthusiasts who want to watch footage on a large screen without the help of a DVD player or home theatre PC.

The on-screen menus are intuitive and well designed, with a simple red-and-grey colour scheme that is easy to navigate from across a room. Options for altering picture quality are much the same as other brands: you are able to alter sharpness, contrast, brightness and a variety of other settings.

Picture quality from the LG 42PQ60D was similar to what we have seem from other mid-range plasma televisions. A quoted contrast ratio of 2,000,000:1 is responsible for the dark blacks and bright whites that we saw, with no compression of colours or detail that we could distinguish. Colours were generally accurate, with no significant problems.

The LG 42PQ60D has a very sharp picture in its default settings; perhaps too sharp for the compressed high-definition television content we tested it with. It was able to show up the majority of the compression artefacts in free-to-air television, though this can be mitigated by lowering the sharpness of the panel or watching better quality video.

Displaying higher quality Blu-ray video was where the LG 42PQ60D really performed. Because of the high sharpness levels images were clearly defined and a lot of fine image detail was visible.

Thanks to the LG 42PQ60D’s 600Hz sub-field drive, motion was smooth and jitter-free. This is always a strong selling point for plasma televisions in the battle against LCD.

The LG 42PQ60D has a native resolution of 1024x768 pixels. This is not a standard wide-screen resolution, with the 4:3 ratio (rather than the 16:9 wide-screen standard) meaning the plasma television has rectangular rather than square pixels. This low, non-HD resolution is unique to cheaper plasma screens; we have seen it before in the impressive Panasonic Viera TH-42PX8A. We found a few scaling issues with PC input through HDMI, with images seeming unnaturally stretched. This is not an issue when watching full-screen video content, though; the on-board scaler does a good job in conjunction with the internal digital tuner or external Blu-ray disc players.

Despite a few teething problems with PC input, we liked the picture quality of the LG 42PQ60D. It is well suited to watching fast-motion sports or Blu-ray discs.