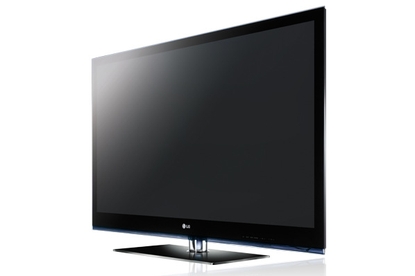 The LG 50PK750 plasma television is a 50in unit that sits in the middle of the company's 2010 product line-up. It's got great picture quality and doesn't draw too much power -- our only concerns are related to its design and warranty.

The LG 50PK750 is a 50in plasma television with a borderless design. It is very attractive and has good picture quality to boot. Overall it's a good panel for a reasonable price.

The LG 50PK750 plasma television uses the 'borderless' design that we first saw on the LG 47SL90QD LED TV. It doesn’t have an embossed bezel of plastic — instead, a single sheet of glass covers the entire front panel. While this is a headache when it comes to fingerprints, it means the LG 50PK750 easy to clean with a cloth. The television also boasts an attractive, relatively thin outer border. We didn’t like the large black borders on the 47SL90QD, but the overall look of the new 50PK750 is more streamlined. It also has a swivelling stand — great to see on a relatively large panel.

The glass panel on the front of the LG 50PK750 is very glossy. It looked fantastic when we’d spent a few minutes polishing it and it does reinforce the television’s excellent industrial design, but it has the unfortunate downside of picking up any and all reflections. It’s great if you’re watching TV in a dark room with the lights off — and this is what we’d always recommend — but if there’s sunlight behind you or some overhead fluorescents, you might notice the odd reflection or two.

We were surprised to see only three HDMI ports on the rear of the LG 50PK750, until we found the fourth conveniently placed on the television's side along with two USB 2.0 ports for DivX, MP3 and JPEG file playback. We think that for most consumers, two HDMI ports is enough — one for connecting a Blu-ray player and another for connecting a set-top box like a Topfield or TiVo. Having four ports keeps the LG 50PK750 in line with competitors from major brands like Samsung and Sony.

The 50PK750 incorporate LG's Internet NetCast access features. There's a whole range of content available on the service, with YouTube always an excellent inclusion for impromptu movie-watching and integrated BigPond Movies is useful if you don't have a TiVo, Internet-connected Blu-ray disc player or media centre PC.

The LG 50PK750 only has a 12-month warranty as standard. While this is no worse than competitors like Sony, we would have liked to see at least a two-year warranty. When buying a new television, warranty length is a paramount concern for consumers — this is why extended warranties are so popular — so we'd encourage LG to consider providing a superior warranty to its competitors.

Moving on from the distracting glossy screen and disappointing warranty, almost every other aspect of the LG 50PK750 impressed us.

The LG 50PK750 is a plasma television, so it has some advantages over LCD televisions (for example, the Kogan 1080P40) and even LED televisions like the Sony NX800. Chief among these is plasma’s ability to display bright whites alongside dark, inky blacks — a merit of the plasma panel’s network of individual cells that control their own light output.

The LG 50PK750 takes a little tweaking to optimise its picture, but once this is done it provides excellent image quality and smooth contrast gradations. You can choose from eight picture modes, but we found the THX Cinema preset generally best when viewing in a dim room. In the User setting we opted to lower brightness slightly, while a slight bump to colour saturation and contrast gave video a punchier look. We left sharpness untouched for almost all viewing — as it is, the LG 50PK750 displays good detail levels without over sharpening edges and high contrast points.

Contrast levels are excellent. In our demanding The Dark Knight Blu-ray test footage, the intro sequence's sharp points of white light were well displayed on the LG 50PK750 without compromising the good detail levels we saw in darker areas of the screen. We didn't notice any significant bloom or light bleed after adjusting brightness levels. When playing Speed Racer and WALL-E we found the picture vibrant with smooth gradation and great levels of fine image detail.

The LG 50PK750 is energy efficient for a plasma television. It claims a four-star energy rating, which matches most similarly sized LCD televisions (although LED-backlit models are more efficient). We found its maximum energy consumption in the THX Cinema preset mode to be around 350 Watts in bright scenes, with darker scenes falling around the 200W mark. This is an impressive figure which is testament to the LG 50PK750's significant advantages in energy efficiency compared to plasma televisions of just a year ago.

LG's 50PK750 is no shrinking violet. The only flaws are its super-glossy screen and mediocre warranty — apart from this, it's an excellent all-round performer including in terms of picture quality. We love its design, too. If you don't want to shell out for a Panasonic plasma or Samsung LED, give some serious consideration to LG's plasmas.