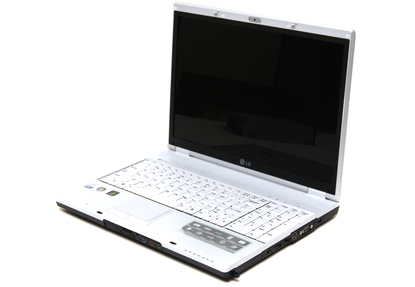 For style and performance in a business machine, the LG E500 is a great option. It scored well in our benchmarks, including the battery test and includes some useful features.

LG has been fairly quiet on the notebook front of late, so it's nice to have their new E500 (SA11A) in our labs. Using Intel's latest Centrino Duo platform (codenamed Santa Rosa), this light grey, almost white business notebook offers the usual swath of ports, looks stylish, includes a full number-pad and carries some grunt under the lid to boot. It also has solid battery life, a bonus for anyone frequently on the move.

The E500's Intel Core 2 Duo T7300 2.0GHz CPU has an 800MHz front side bus (FSB), a new feature supported by the latest Centrino Duo chipset. The added bandwidth in the FSB is coupled with Intel's new power saving and efficiency features, including Enhanced Dynamic Acceleration, for better overall performance. A healthy dose of RAM (2GB of DDR2 667MHz RAM) is included, and the E500 also sports an NVIDIA GeForce 8400M G graphics chip.

Based on style and performance, the E500 would easily suit either personal use or business applications, but its added hard drive security and Windows Vista Business operating system give away its true purpose as a business notebook. One feature it does lack though is a biometric fingerprint reader. However, it does have a 1.3 megapixel camera built into the top of the screen, a feature often omitted from business units. Webcams are often affiliated with video chat and sites like YouTube, but video conferencing for business is a very real option.

The E500 performed well in our benchmark tests. It scored 79 in WorldBench 6,offering solid performance in Firefox 2 and Office tests, as well as some of the more taxing applications such as Adobe Photoshop and video encoding tasks. We also ran it through an MP3 encoding time-trial, testing how long it took to convert 53 minutes worth of WAV files to 192Kbps MP3 files. Using CDEX, a freely available MP3 encoder, the E500 achieved this in 135 seconds. Although this is a speedy score for anyone planning to rip their CDs to this notebook, it also indicates the CPU can handle some fairly hefty processing with reasonable speed.

The 15.4in screen offers a resolution of 1280x800 and is very bright with reasonable contrast. It has an equally reasonable vertical viewing angle, though it's not perfect. The screen is fairly sturdy, showing little distortion when pressure is applied to the back of the lid. Speakers line the base of the notebook below the screen and offer fairly average quality audio, but a decent amount of volume.

As a battery test we looped a DVD while running the E500 off its battery only. This test causes a significant strain on the battery by using the optical drive, speakers, LCD and other core components simultaneously, and as such it's considered a worst-case scenario test. In this test the LG E500 lasted 97 minutes.

The E500's keyboard is responsive and the number-pad is a useful addition. Unfortunately, to facilitate the number-pad, keys near the right hand side, including 'enter', right shift and backspace, have been squashed. The touchpad is fairly responsive and the scroll area of the pad has been clearly marked for convenience. A 160GB hard drive is included, so storage shouldn't become an issue too quickly. A DVD re-writer offers dual layer support and there's even a media card reader, which supports four different cards; SD, MMC, MS and MS-Pro.