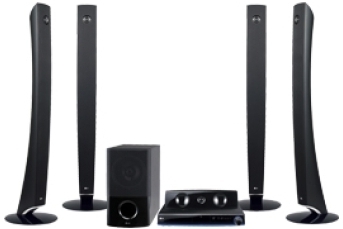 The LG HB954WA is a feature-packed home theatre bundle with decent sound quality. We like the inclusion of YouTube access and the integrated iPod dock, and the fact that this system is one of the cheaper Blu-ray compatible units serves to recommend it further.

The LG HB954WA home theatre system has an integrated Blu-ray disc player, an iPod dock and wireless rear speakers. Its sound quality could be slightly better and the system's styling may not be to everyone’s tastes, however.

As usual, unpacking and setting the LG HB954WA up is a chore. We had some trouble screwing the four floor-standing speakers to their stands. Once all the components are appropriately assembled, moving them around is easy because the speakers are not very heavy.

The speakers' slim stature means they are easy to place and won’t take up too much space in your living room. The squat, piano-black subwoofer is harder to hide; we’re still yet to see a subwoofer apart from the Bowers & Wilkins PV1 that would look good as the centrepiece of a living room.

The combination amplifier/receiver and Blu-ray player is the centre of the show, with two HDMI inputs and a single HDMI monitor output. This means you can connect external devices like a set-top box or personal video recorder. Almost everything you need is built-in, though. The system can play DVDs and Blu-ray discs, display YouTube videos and play video off an iPod.

Blu-ray video was on par with most of the other players we’ve seen, such as LG's own LG BD370, exhibiting good fine image detail and a wide colour gamut. The inclusion of an HDMI cable with the system means you’re able to get the best possible image quality on your LCD or plasma television without purchasing additional components.

YouTube and iPod video was handled well. With YouTube clips you have the option of watching content either in full-screen mode or in a window with ratings and a description. We’re certainly not YouTube fans; — perhaps if comments were turned off and it was as fast and pretty as Vimeo we’d like it more — but the video quality was no worse than we expected.

The floor-standing speakers have crisp, clear treble that only becomes fuzzy and harsh when the volume is uncomfortably loud, as well as appreciable amounts of mid-range. They make the LG HB954WA equally adept at music reproduction and movie sound. The centre speaker is well tuned for dialogue, with human voices sounding natural and well projected. The subwoofer is slightly less exciting, with bass that sounds slightly too boomy and forced. This is a result of the subwoofer aiming to fill the frequencies of the floor-standing speakers, which are unable to reproduce any noticeable bass — understandable in a budget system, but still a pity given Mark Levinson's tuning.

The wireless rear speakers don't require additional dongles or RF modules and work seamlessly with the rest of the system. It’s good to see them appear at this price point, since their inclusion turns the LG HB954WA into a good value proposition for a budding home theatre enthusiast.