The LG HB965TXW home theatre system is compact and stylish 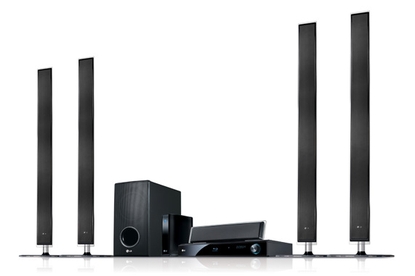 The wireless rear speakers of the LG HB965TXW home theatre system make it easy to set up, and the system's NetCast Internet connectivity allows easy access to YouTube and BigPond Movies video-on-demand content. It would be a good companion to a similarly styled LG LED or plasma TV.

The LG HB965TXW is a surround-sound home theatre system with wireless rear speakers. It is a reasonably good looking system and would match up well with LG's LED or plasma televisions. Its sound quality is a distinct step up from a television's integrated speakers, and the wireless connectivity is great for larger rooms. It won't stand up to a more expensive home theatre system for full-volume movie sound, but as a budget purchase to go alongside your plasma television it works well.

The LG HB965TXW home theatre system mimics LG's more expensive plasma and LED televisions like the LG LX9500 plasma and the LG LE7500 LED television, with a glossy black finish and translucent plastic edges on the speakers. It's attractive, although we did notice the speakers picked up plenty of smudgy fingerprints while we were setting them up. The Blu-ray player/amplifier looks like any other and will easily blend into a home entertainment setup.

Setting up the LG HB965TXW does take some time, as you'll need to screw each speaker into its stand and run wiring to the front three speakers and subwoofer. Having wireless rear speakers is useful, especially if you've got a large room or don't want to have unsightly cables running along your skirting boards. The LG HB965TXW has a wireless transmitter that you'll need to set up alongside the Blu-ray player to connect the rear speakers.

Once you've got the LG HB965TXW home theatre system assembled and positioned, you'll need to hook it up to your other home theatre components. Two HDMI inputs and a single output allow multiple A/V devices to be connected with video throughput to your television. Older devices like VCRs can be connected with the LG HB965TXW's composite and component jacks. Ethernet and wireless 802.11b/g/n makes network connection and Internet access easy.

Around the front of the Blu-ray player you can find a USB port — for playing movies, music and photos off a flash drive or external hard drive — as well as an iPod dock and a 3.5mm jack for connecting a portable music player. The iPod dock, which plays music and video as well as charging your device, is an inclusion we'd like to see on all home theatre systems of this type.

The LG HB965TXW home theatre system sounds markedly better than the speakers built in to even the best LED or plasma televisions. It's rated at 1100W RMS of power output, with each individual speaker packing 180 Watts of audio grunt. When you realise that a television can handle around 20W of speaker power, the difference is obvious. We were able to reach impressively high volume levels with the LG HB965TXW before treble and mid-range distortion crept in, but the system's 200W passive subwoofer is its weak point. At moderate volume levels it provides a useful hit of mid-bass, but pushing it to its limit reveals muddiness and a tendency to audibly clip.

The LG HB965TXW home theatre system is a 5.1-channel system and can reproduce positional audio reasonably well. Its centre speaker is a little small for consistently clear movie dialogue, but the four floor-standing speakers are able to recreate environmental effects and surround sound with good clarity and separation.

LG's environment policy outlines some of the company's sustainability efforts, including minimising its carbon footprint and producing greener products.