The LG HR599D can function as a PVR, a Blu-ray player and a media streamer The LG HR599D Twin HD Recorder / Blu-ray Disc Combo is a good option for watching Blu-ray movies and recording TV shows in high-definition. On the downside, its editing capabilities are quite limited.

The LG HR599D is a high-definition HDD recorder with a 500GB hard drive, twin digital HD television tuners and the ability to play Blu-ray discs. The HR599D Twin HD Recorder / Blu-ray Disc Combo also comes with integrated Wi-Fi (802.11n) and a front-mounted USB port with DivX support. In other words, it provides the functionality of a PVR, a Blu-ray player and a media streamer -- all in one sleek looking device.

The LG HR599D is one of the most feature-packed HDD recorders on the market, but it also has a price tag to match. With an RRP of $1379, it is significantly more expensive than most of its competitors, including the Sony RDR-HDC500 and Panasonic DMR-XW350. It also lacks inbuilt editing tools and Audio/Video inputs; two pretty serious omissions.

On the plus side, we found the LG HR599D to be a lot more user-friendly than the typical HDD recorder, courtesy of a helpful manual and intuitive menu interface. The inclusion of a Blu-ray drive is also bound to please — particularly by those who have yet to make the leap to HD.

The LG HR599D is one of the better looking HDD recorders on the market. With dimensions of 430x55x295mm, it is surprisingly sleek for such a fully featured device. An elegant glass fascia covers the playback buttons and front connections, with a flashy Blu-ray logo dominating the centre. The LG HR599D is considerably more stylish than Sony’s rival PVR range, which is surprising given that company’s pedigree. In short, the LG HR599D looks exactly how a $1379 HDD recorder should. 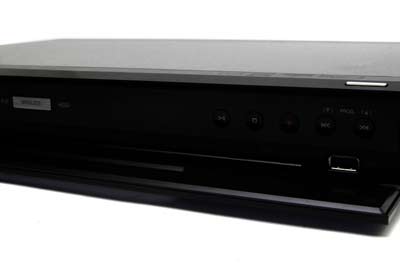 Our only issue with the design is the location of the USB port, which is tucked away behind the face plate. Consequently, you’re forced to fold the face plate down whenever you use a USB device — even if it connects via cable. This spoils the aesthetic value and negates the purpose of having a face plate in the first place. This might not sound like a big deal, but many people like to keep a thumb drive permanently connected to their PVRs. Simply put, it looks ugly.

The LG HR599D comes with the usual connectivity outputs, including composite AV, component video (RGB), HDMI, coaxial digital audio and Terrestrial RF In/Out. An Ethernet port is also included for users who lack wireless routers. As mentioned, the LG HR599D Twin HD Recorder / Blu-ray Disc Combo does not offer any AV inputs; which means you can’t transfer video from a non-USB device. This is a frustrating omission if you happen to own a MiniDV camcorder or have lots of VHS tapes. (To be fair, most camcorders use USB these days, so this really only effects old school users.) 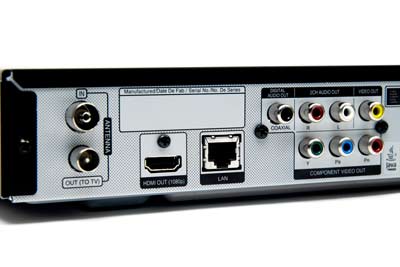 To test the LG HR599D’s playback performance, we connected it to a Pioneer KURO PDP-C509A plasma TV via HDMI. Our Blu-ray edition of Terminator: Salvation looked flawless, with superb colour saturation and image clarity. The disc tool 47 seconds to reach the menu screen — slightly above average for a Blu-ray player.

The twin HD tuners also provided exceptional picture quality. Naturally, you can use the tuners to record two channels simultaneously; something that the Sony RDR-HDC500 lacked. On the downside, there are no options to edit recordings directly from the hard disk — instead, you have to transfer the data to a PC first. When you consider that most entry-level HDD recorders let you remove commercials and the like, the lack of inbuilt editing tools is especially galling. (The unit comes bundled with Nero Media Home 4 editing software, but this is small consolation.)

One of the LG HR599D’s main draw cards is the inclusion of Wi-Fi. The advantage offered by wireless connectivity is obvious: it means you don’t have to run unwieldy Ethernet cables from your network router to your Blu-ray player. We encountered no problems connecting the device to our wireless network (something that can’t be said of every wireless Blu-ray player). We streamed a few YouTube videos directly to the TV using the NetCast interface and were pretty impressed with the results.

All in all, the LG HR599D isn't a bad unit, but we were expecting a little more functionality for the asking price. That said, if you can live without inbuilt editing and AV inputs, it won't disappoint.