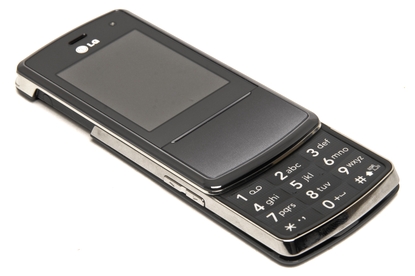 LG’s KF510 is an interesting device that provides a well-implemented touchpad control system. The lighting effects are a nice touch, but this isn’t the greatest phone in terms of features. However, it represents good value at this price.

At just 10.9mm thick, the KF510 is one of the thinnest sliders on the market. It's certainly an attractive handset, and what LG has dubbed the "alluring colour gradation" is a nice finish. Unfortunately, the KF510s build quality is a little disappointing — although most of the handset feels solid, the rear battery casing is flimsy and doesn't sit firmly in place, rattling when touched.

The KF510's claim to fame is the touch-sensitive control pad and touch lighting effects. Completely invisible when not in use, the touchpad's interactive lighting appears when the handset is woken from standby mode. Touch-sensitive keys include two selection buttons, an answer and end call key and a five way navigational pad. The touch pad is quite responsive and easy to use. We liked the mini light display on the pad — when you press right on the pad, for example, a mini light display appears and shows an arrow pointing right. Although this is a nice feature, the novelty will quickly wear off.

The KF510 slides up to reveal a large and comfortable keypad. Our only complaint lies with the top row of keys: they are quite close to the edge of the slider, so it can take a little while to get used to. The keys are a reasonable size, provide good tactile feedback and are comfortable to press, so dialling and messaging is relatively hassle-free.

LG's interface is a strong point of this handset. The main menu can either be a simple grid or list layout. Most submenus feature a simple list format. We found the interface to be quick and responsive for most part.

Aside from the design and touchpad features, the KF510 is quite an ordinary handset. We were disappointed that it isn't 3G-capable, only offering tri-band GSM capabilities. This means you'll need to look elsewhere if you are after mobile Internet access — GPRS speeds make browsing painstakingly slow on the KF510.

The KF510's multimedia functionality is average. Although it includes an MP3 player, camera, video and voice recorders, and an FM radio, this phone is let down by LG's insistence on a proprietary headphone/charging jack that's hidden behind a flimsy plastic cover. The MP3 player provides playlist support and basic settings like shuffle, repeat and a 10-preset equaliser, but sound quality isn't the best. The 3-megapixel camera with autofocus and an LED flash will be fine for a few happy snaps, but don't expect brilliant photos.

Other features include a calendar, memo, alarm, calculator, stopwatch, unit converter and world clock — an admirable list of PIM functions for a handset in this price range.

The lost mobile tracker is also a handy addition — an LMT code (default code of 0000) means your phone can be traced in the event that it is stolen.