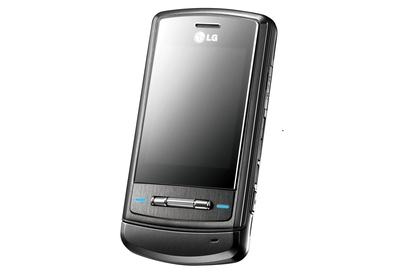 The Shine Slide has plenty of style, but a poorly designed keypad and questionable controls don't do this handset justice.

A GSM version of the popular and stylish Shine (KU970), the Shine Slide (KE970) is targeted at those on a budget who may not necessarily need 3G capabilities but like the mirror-style design.

Being a fashion handset, the key selling point is looks and the Shine Slide, like its predecessor, doesn't disappoint. It looks almost identical to the Shine (KU970). It's constructed entirely of shiny metal with a mirror finish on the screen and bezel. Although this design wins points for looks, it's difficult to keep clean. The screen itself is impressive — it's bright, clear and has a reasonable viewing angle. A downside is that due to the glossy surface the display is almost impossible to view in direct sunlight.

Unfortunately some of the design elements are also problematic. The main issue is the keypad. The keys are stiff and not very tactile, resulting in longer messaging times and some unnecessary strain placed on the fingers.

We also had an issue with the side-mounted controls, which are composed of camera, menu and two navigation keys. They are placed towards the bottom of the unit, making it necessary to alter your hand position in order to access them. The rest of the controls include a scroll wheel for general navigation, two selection buttons, answer and end call keys, and a cancel button. The scroll wheel works reasonably well, though we would have preferred the convenience of a standard five-way pad.

One area where the Shine Slide definitely improves over its predecessor is the user interface. Although it still isn't the fastest we've come across, it's generally speedy and keystroke lag isn't an issue. The interface itself is also easy to use, utilising a standard grid system with labelled and animated icons.

The Shine Slide is a standard, tri-band GSM phone so it won't serve users looking for mobile Internet connectivity. Call quality is acceptable, although volume could have been louder at the highest setting. All the expected connectivity options are supported, including USB 2.0 and Bluetooth 2.0 with A2DP support. The latter is a welcomed feature, as the KE970 uses a proprietary headphone jack rather than a standard 3.5mm jack.

All the usual PIM functions are available, including calendar, memo, stopwatch and alarm clock. There is also a voice recorder, and the 2-megapixel camera doubles as a video recorder. The camera itself takes decent quality photos; the included flash performs well in darkened areas. There are also plenty of settings, including multi-shot, white balance pre-sets, night mode and special effects, including sepia and negation.