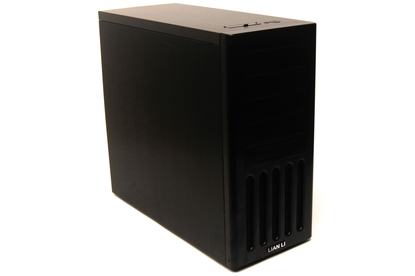 The Lian Li PC-K8 is a stylish PC case that is relatively easy to use. It is also a quiet case. Its main drawback is a power supply unit that doesn't provide native 8-pin and 24-pin power connectors.

The Lian Li PC-K8 is a mid-tower PC case with modest looks and plenty of space. However, its power supply isn't suited to high-end gaming systems because it lacks native 8-pin and 24-pin power connectors.

The case provides four 5.25in drive bays and one 3.5in drive bay, with space for four hard drives to be mounted in brackets. The construction of the case and the drive bays is sturdy and reliable.

If you're after a well-ventilated case that looks more menacing than a bog-standard white box, then the Lian Li PC-K8 will probably appeal you. While it doesn't have the bizzarro appeal of the [artnid:270055|Antec Skeleton|Review: Antec Skeleton]] or the gimmicky features of the In Win B2 Stealth Bomber, the sleek black aluminium is easy on the eyes.

It is therefore strange that Lian Li interrupted its case's understated chic with bright blue 'look-at-me' LEDs. These light up the front-mounted 140mm fan and can't be switched off. Although the fan is removable, doing so requires the removal of hard drive bays — a time-consuming process.

Looks aside, the 140mm fan is very effective at bringing cool air into the chassis and a 120mm rear fan works well to extract hot air. To test the system we installed an EVGA nForce 790i SLI FTW, an ASUS EAH4850 MATRIX/HTDI/512M and a Lite-on IHAS 220-08. The case stayed cool and quiet, with the motherboard being the loudest thing in the case during our testing.

The front connections aren't mounted on the fascia of the Lian Li PC-K8 but under a flap on the top of the case. Two USB 2.0 ports and a FireWire port are included, along with microphone and headphone ports.

One excellent feature of the case is its detachable motherboard plate. When we unscrewed the side panel behind the motherboard, we found two handy cable holders. Once unclipped these cable holders acted as a handle for the internal board, which was able to slide out for easy motherboard installation. Both ATX and mini-ATX motherboards will be able to fit without any problems.

Although the Lian Li PC-K8is being marketed as a case for gamers, its supplied power supply is 450W and does not have up-to-date connectors for motherboards and graphics cards. It lacks both a native 24-pin and a native 8-pin power connector, and provides one 20-pin and two 4-pin connectors instead. There are no PCI Express graphics card cables available.

Installing hard drives is relatively easy thanks to four drive bay slide brackets. Rubber sliders have been provided to reduce vibrations and noise, and these go between the hard drives and the screws. The only downside to this is that unlike with the Lian Li PC-60F, it will be up to users to decide when the screw has been tightened enough based on trial and error. If you tighten the screw too much, the rubber will compress too far and will fail to mount properly — too loose and you run the risk of the drive falling out.

Installing optical drives is easy for the top two drives, with plastic clips holding them in place without the need of screws. There is enough clearance space for connection cables with both the optical and hard drive bays, but installation in either section will require the removal of both side plates.

Two heavy-duty cable clips are provided in a separate pack and you're free to choose where to place them, which is useful given the number of cables you'll have to deal with.

So if you're after a solid case that provides plenty of ventilation, looks good, is relatively easy to maintain internally and won't break the bank, the Lian Li PC-K8 is well worth a look.