i-Helicopter review: A remote control helicopter that works with your iPhone or Android phone 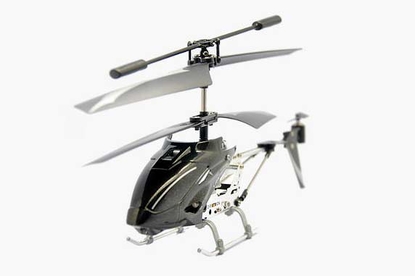 You will probably never understand how much more enjoyable it is to review a product like the Lightspeed i-Helicopter compared to a printer. This helicopter will provide a lot of fun until you inevitably fly it into something solid with a little too much force.

When the i-Helicopter arrived it was probably the single greatest threat to productivity in our office since we pitted two Roomba robotic vacuum cleaners against each other in the PC World Test Centre.

Like a plague (or perhaps even a less clichéd metaphor), this smartphone-controlled helicopter progressively disrupted the office workflow. In other words, once it arrived and was fully charged, I couldn't resist staging a demonstration for every division in the company [Your crashes were most amusing - Ed].

The 'iHelicopter Lightspeed Phone Controlled i-Helicopter' is pretty much what it sounds like: A diminutive flying vehicle that you can control with an app you install on your phone. The app is free and is available for the iPhone as well as a growing list of Android handsets. The magic is courtesy of a small IR transmitter about half the size of a Bic cigarette lighter that plugs into your phone's headphone jack.

Both the helicopter and the IR transmitter require charging, which is done using a cord that plugs into a USB port on a computer. Sadly only one cord is included, which is extremely frustrating when you've got Ride of the Valkyries cued up on YouTube. The transmitter has a quoted time of an hour to charge fully; the helicopter 40 minutes.

After charging, the fun began and we proceeded to fly our little chopper into everyone and everything. The smartphone app has a simple on-screen joystick for direction and a slider for altitude (you can also enable motion sensing and use your phone's gyroscope to control motion).

The helicopter can be quite difficult to control at first, and I strongly recommend testing it in a room that's not full of breakable objects. But even when it's flying into cubicle walls, computers and co-workers it is insanely fun.

It is, however, a little delicate. Until you're comfortable with controlling it, avoid using it outside: It can go extremely high, as the editor of Computerworld and I discovered in a nearby park, and it doesn't take kindly to less-than-delicate landings. However, even when we'd managed to damage severely the tail rotor thanks to some over enthusiastic vertical movement, the helicopter still worked. (It's worth noting that the helicopter isn't really meant for outdoor use; we're just a bunch of geeky rebels.)

Probably the hardest thing in terms of control is achieving a nice, even flying altitude. But then a lot of the fun is having the helicopter careening about the place wildly.

All up this is probably one of the more fun ideas for a Christmas gift for a gadget lover that we've encountered this year. At only $US60 including free worldwide shipping from http://www.i-helicopters.net/ (and £29.99 at http://www.paramountzone.com for European customers]], I think it's decently priced as well. I had an absurdly fun time flying it round (I am just a big kid it turns out), and more than one co-worker was green with envy.

* Python vs. PHP: Choosing your next project's language