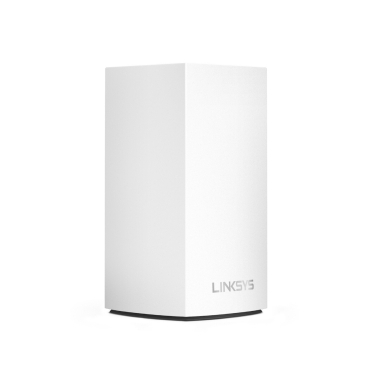 The line between good and bad network connectivity usually comes down to visibility.

“Good Wi-Fi” isn’t really a thing you notice. By nature, it’s as ephemeral as it is inconspicuous. On the other hand, “bad Wi-Fi” is very noticable. Dropouts and bottlenecks can have a very pronounced and negative impact on your home internet experience. It can ruin a Netflix-powered night-in and can drive even the most-determined of online gamers to the breaking point. Yeah, I'm speaking from personal experience here but I doubt I'm alone.

The line between good and “great Wi-Fi” is even more nebulous.

It’s easy to read on a box or website that one router might offer slightly faster speeds or slightly broader coverage. But, so long as it hits all the marks you’d expect from “good Wi-Fi”, does it really matter whether it qualifies as great?

Linksys’ new Velop Dual-Band Mesh Wi-Fi System falls closer to good than great. It’s not as boundary-pushing as its tri-band cousin. But it’s also cheaper. And, when it comes down to it, that price-differential counts for a lot more than you’d expect it to. There are always going to be more people willing to pay less for “good Wi-Fi” than there are people keen to pay more “great Wi-Fi”.

Linksys are simply responding to that market demand.

App: Linksys (available on both Android and iOS)

The new Velop AC3900 is Linksys’ second stab at the mesh Wi-Fi market. It’s less powerful than their previous tri-band system but - again - it’s also much more competitive when it comes to price.

Each node in the mesh system is a tall, white rectangle with a grilled tent-like roof to it. This block-like shape does make them a little bulkier than the D-Link’s Covr or TP-Link’s Deco nodes but, all things considered, they do match these competitors when it comes to look.

Read more Linksys WRT32X review: An esports-grade router in a class of its own

When it comes to aesthetics, the Velop is a lifestyle router through and through. Proportionally, each node in the AC3900 is a little smaller than their AC6600 counterparts - but that’s about the only visible difference between the two.

Beyond that, the biggest points of contrast here are price and performance.

Focusing on the former for a moment, I suspect that Linksys found the home Wi-Fi market wasn’t quite as receptive to the pricier, technically-superior “great Wi-Fi” supplied by their AC6600 Tri-Band Mesh Wi-Fi kit. Priced about $200 cheaper, the Velop AC3900 is positioned much closer to rivals like Google’s Home Wi-Fi Kit ($499), Netgear’s Orbi ($499) and TP Link’s Deco system ($399).

For the most part, the setup for the Velop AC3900 is pretty much the same app-driven experience that you’ll get out of other competing mesh Wi-Fi options. You download the app, you plug in your prime Velop node and connect it to your router. Then, you update the firmware, add up to two more nodes and you’re good to go.

During the setup process, Velop will recommend the best placement to reduce latency, maximise throughput and improve range and signal strength. In theory, this is a nifty little inclusion. However, in practice, it’s value inevitably ends up curtailed. Just because the software says that somewhere might be the best spot for the Velop node to sit doesn’t necessarily correlate to it being a practical spot.

There are a few other edges worth noting here. For one, the Velop AC3900’s dual-band nodes are interoperable with the existing tri-band mesh wi-Fi nodes. This means that, should you already own the latter, they represent a significantly more affordable method of expansion.

Like TP-Link’s Deco M5, the dual-band Velop AC3900 features an iota of smarts guiding how it provides Wi-Fi. Relying on a feature called Intelligent Mesh. the Velop AC3900 adapts to a user’s WiFi needs by self-healing and optimising. The real-world impact of this special sauce is hard to gauge but, given the lack of any real issues we had while testing this Wi-Fi kit, we’ll give Linksys the benefit of the doubt.

Finally, the Velop AC3900 also boasts support for several Amazon Alexa skills. Once set up, these allow you to turn the guest network on and off and read back the credentials of both the main and guest networks. It’d be nice to see more complex actions incorporated here but, should you be the smart-home heavy user this feature is intended for, it ends up being a neat addition nevertheless. It’s just a shame there isn’t a comparable level of Google Assistant integration.

Performance - How Does The Velop AC3900 Compare To The Competition?

A few minor setup hiccups aside, we came away pretty happy from our time testing out Linksys’ Velop mesh wi-fi system. We never had any drop-outs or major hassles here. Just consistent performance.

In terms of how it compared to the other mesh Wi-Fi Systems, the Linksys Velop Dual-Band Mesh Wi-Fi system fared well but didn’t manage to topple our reigning champ, the Deco M5.

The testing above was done by setting up nodes in all the usual places in our three-story home and measuring the signal strength using Netgear’s Wi-Fi Analytics app for Android.

Despite only scoring the runner-up slot in the results shown above, we still wouldn’t hesitate to recommend the Linksys Velop AC3900 Mesh Wi-Fi system.

Across the board, it’s a reliable, easy-to-setup and feature-rich mesh Wi-Fi system. Unless you’re primed to integrate it with an existing tri-band setup or your smart home via Amazon Alexa, I don’t know if I would go so far to call it great.

But I wouldn’t hesitate to call it good either. And if you’re after good Wi-Fi, the Velop AC3900 is a great option.