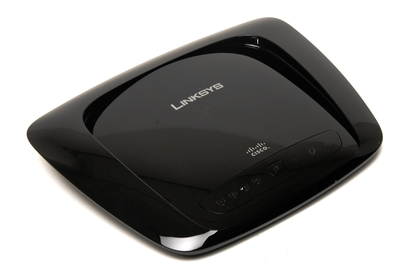 Linksys might say the focus of this router is on range, but it's not too shabby when it comes to speed, either. It's an 802.11 draft-n-based wireless router, which is easy to set-up and it looks great.

A fast and far-covering wireless N-based router doesn't have to cost you a lot of money, just look at Linksys' example. The company's WRT160N is one of the slickest-looking and fastest wireless routers on the market, yet it costs just $169.

It's great value for anyone who's looking to build a new wireless home network for video streaming and general Internet access. And it won't look out of place in the lounge room, either.

With a striking new industrial design and a shiny black shell, the WRT160N looks as flashy as any consumer electronics product on the market. There aren't any external antennas to install, nor does the router itself look bulky. It has a sporty look, in fact, and its two antennas are located within the shell of the router. The only aspect of the design we don't like is the bright blue status LEDs, which are a little too bright at night. We'd like the option to switch these off or tone them down a little.

For connectivity, the WRT160N router has a built-in 4-port, 10/100 Ethernet switch and a 2.4GHz wireless access point that can handle 802.11b/g and draft-n speeds. Up to 300Mbps is the theoretical maximum speed for wireless transfers, but due to network data overheads and interference, no wireless router can give that sort of performance. We tested it by transferring data to a notebook with an 802.11 draft-n adapter installed.

We averaged good speed during our transfers – 6.31MBps. This was from a distance of 10m away and with walls and doors as obstacles. While simultaneously streaming video to an 802.11g-based Netgear Digital Entertainer HD EVA8000, the same 802.11 draft-n-based transfer to our notebook averaged 4.3MBps, so you can see that there's plenty of bandwidth available for this router to stream multiple videos around the home.

Regarding range, the router streamed video up to approximately 30m away without breaking up, but walls, doors and windows, as well as other electrical appliances will affect the range in your own home environment. For us, this distance is just as good as other wireless N routers we've seen (such as D-Link's DGL-4500 Xtreme N Gaming Router).

The router's set-up procedure is quite simple for the uninitiated. A CD-ROM is supplied, which guides you through the whole process of connecting it and entering your ADSL or cable Internet connection details. It then goes through the wireless settings so that you can easily enter a network name and a password. Furthermore, the router supports Wi-Fi Protected Setup (WPS), which allows you to implement wireless security at the press of a button (or via a configuration file or PIN) if your other devices support WPS, too.

For users who want to delve deeper, the router's Web configuration interface offers quality of service (QoS) settings to play with, which can optimise gaming or voice traffic over the Internet, as well optimise local network traffic according to MAC address or Ethernet port. It doesn't have customisable security options; however, its SPI firewall is enabled by default and you can also opt to filter Web sites with Java or ActiveX content. There aren't any URL or keyword filtering options, so if you're a parent wishing to block certain sites, you'll have to use a third-party application such as K9's K9 Web Protection.

Once it's set-up and has been running for a while, the router won't get too hot, despite its small size and it proved to be reliable during our long test periods. It's suitable for users who aren't experienced in setting up a wireless router, but seasoned users will find it to be a good unit, too.