The Linksys X2000 ADSL2+ modem-router offers good wireless networking performance for the price and it's a very easy product to set up and use. It's perfect for anyone that hasn't configured a networking device before because all that's required to get up an running is your ISP login information. Its modem was a little slow in our tests though.

The Linksys X2000 is an ADSL2+ modem-router that's very easy to use. Even if you've never installed a networking device before, the supplied setup program and instructions should help you to be up and running in no time at all.

The X2000 isn't the bee's knees when it comes to routers though — it's a basic, entry-level product when compared to other routers we've seen recently, such as the high-end Netgear WNDR3800. It has 10/100 Ethernet ports rather than Gigabit, and it doesn't have a USB port for sharing printers or drives across a network. It supplies only the necessary components that are required to connect a modern home: an ADSL2+ modem, a single-band (2.4GHz) 802.11n (300Mbps) wireless access point, a 10/100 Ethernet switch and a built-in firewall.

Its flat, sporty style is the same as previous Linksys routers that we've seen over the years, such as the previous high-end E3000 dual-band router and the previous entry-level E1000 router products, but not the E4200, which is Linksys' home entertainment-styled product. The rear of the router has a cluster of three 10/100 Ethernet ports as well as two Internet ports. One of these ports is for the phone line that will feed the built-in ADSL2+ modem, while the other is an Ethernet port that can be used to plug in a cable modem — the X2000 supports both types of connections, which is convenient if you ever want to switch from one type of service to the other. The front of the unit has white status LEDs and we love the fact that most of these lights can be disabled through the router's Web interface.

The X2000 ships with Cisco Connect software that offers clear and concise instructions for setting up the modem-router. The instructions tell you where all the cables need to go and guides you through all the steps you need to take to get online. It's a swift process: the only thing you have to do is enter your ISP account details. The password is not hashed, so you can make sure you're getting it right as you enter it.

After getting connected to our iiNet account without any hassles, Cisco Connect then took a couple of minutes before bringing up the wireless networking settings. The router has a network name (SSID) and password by default. The default name for ours was BrightPine and we were given a password (using WPA/WPA2 combo encryption) that we had Buckley's chance of committing to memory. Luckily, the program allows you to enter your own network name and password at this point. 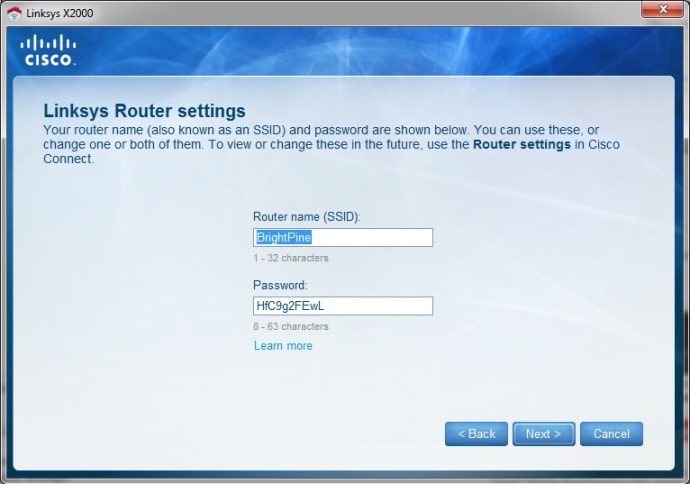 A default wireless network name and password is supplied, but you can easily change it to your own.

Cisco Connect takes a few more minutes to complete the setup procedure after this point. Part of the reason it takes so long is that it installs itself on your computer in the background. This software is quite a big part of this router's overall user experience. Once it's installed, you can use it to control most the router's main functions.

You can connect wireless computers to your network, either by copying the settings to a USB key or manually using the displayed SSID and password; it allows you to enable the guest network so that visitors can access the Internet, but not your local network; it allows parental settings to be applied to any computers on your network, although this is limited to enabling a filter that's suitable for either children or teens; it allows you to run diagnostics such as testing your ADSL2+ connection speed, or to switch off the majority of router's white status LEDs.

It also allows you to launch the router's Web interface, where all the configurable settings are available. The X2000's Web interface is the same as the interface on previous Linksys routers. If you know what you're doing, then you can set up the router much quicker through the Web interface than the Cisco Connect software.

The parental filter that's supplied in the X2000 is hit and miss at best. For it to be applied, you have to enable the setting that offers to "block Internet access" and this isn't really clear at first. At the "child" level, the filter will block email and chat access, as well as social networking sites — this worked effectively during our tests, allowing us to seemingly cut all ties with the outside world. However, it didn't cut all ties.

We found it to be ineffective at blocking out other adult content, primarily because it doesn't block keywords and because it also doesn't have a comprehensive list of flagged sites. Simply entering search terms in Google would allow access to all and any adult-level content. There is a URL filter option, which allows you to add specific Web sites that you don't want your kids to access, but this didn't work during our tests either. We added specific adult site URLs to this filter that still loaded without any problems.

Basically, we found this feature to be unreliable in our tests and don't think it should be trusted. Make your kids use the Internet in front of you and keep an eye on them if you are worried about what they see on the Internet. The filter on routers such as the Netgear WNDR3800 is much more effective, but that router is also more advanced and more expensive than this one.

The X2000's performance was a little hit and miss as well. While its 802.11n wireless performance was solid, the modem was a little slower than we were expecting compared to other modems we have tested. It recorded a download speed of just over 10 megabits per second (Mbps) using the PC World Broadband Speed Test, which is about 6Mbps slower than what we get with high-end modem-router units. Its upload speed of 0.83Mbps is a fair result though.

Its wireless performance was solid throughout our long testing period. It recorded 8.57 megabytes per second (MBps) in our file transfer tests from 2m away and it was actually quicker from 10m away, recording 8.8MBps — for comparison's sake, this is faster than what the Linksys E3000 recorded in the same tests. We don't think you'll have any problems streaming video files from one room to another (we didn't) and the router's MIMO antenna configuration should provide a decent usable range for Web browsing. In our range tests, the X2000 was usable for Web browsing at up to 34m away. This range will vary depending on your own environment, but compared to other router's we've tested in our environment, the X2000 provides a result that is more than decent (as an example, the Linksys E3000 reached 38m in the same test).

While it doesn't have many advanced features, the X2000 is versatile (it can be used with ADSL2+ connections or with a cable modem) and it offers solid wireless networking performance. We found its modem to be a little slower than expected and we wish its parental filter was more effective. It's a very easy product to set up and use though and we don't think you'll have any problems getting up and running, even if you've never configured a modem-router before.