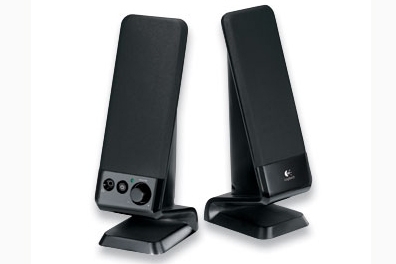 The Logitech R-10 aren’t the best sounding speakers on the market – in fact they’re not even close. However, what the R-10 offers is unsurpassed and outstanding value for money. At this price, they’re a steal.

It's not often we review such a basic pair of PC speakers, but for notebook users and those with a limited amount of desk space, the extra size and weight of a 2.1 system flanked with a typically large and heavy subwoofer means a lack of portability. Enter the Logitech R-10 - a simple, yet effective 2.0 PC speaker set-up which provides outstanding value for money and surprisingly efficient sound quality.

Let us start by saying that there's nothing overly attractive or outstanding about the R-10. In short, they are an extremely basic set of desktop or notebook PC speakers. With a fairly orthodox black finish, the compact and petite R-10 will definitely appeal to those with a lack of desktop space - and make no mistake, there are plenty of us out there!

Despite being very basic, it must be said that the R-10 contains all the controls needed for both ease of use and convenience. The left speaker contains a Headphone Jack, a Power Button, a Green LED and the Volume Control. The controls are all easy to access and we experienced no problems or annoyances with them - perhaps with an exception to the lack of bass and treble controls. However, it must be said that these functions sometimes aren't even available on higher end units, so to ask for them on such a low priced and basic unit is perhaps asking a little too much.

The speakers themselves are fairly thin and light, although if you're looking for a slimmer number, you're best bet would be the TDK Tremor xa60 - but do note the major price difference. The R-10's are fuller, and slope out as they move downwards to the plastic base - which has convenient anti-slip rubber grip pieces underneath to prevent unwanted movement.

The R-10 is simple to set up - a coloured cable plugs into your PC's sound card, while the AC adapter is the only other connection you'll need to worry about. To say we were surprised with the sound quality of the R-10 is perhaps an understatement. While they won't ever compete with most 2.1 systems, you'll struggle to find better sound for such a low price anywhere else. At under $30 (RRP at the time of review), the R-10 delivers crisp, clear sound with no notable distortion or interference. The bass isn't the greatest and those who enjoy their pounding beats in heavier tunes may be somewhat discomforted, but for everyone else, the clarity and crispness that the R-10 delivers really makes you check the price to make sure you haven't been fooled. The only complaint we have is with the volume, which could have been a little louder at its highest setting.

Undoubtedly, the best feature of the R-10 is its value for money. If there's a better pair of basic PC speakers then we'd really like to know about them.