If you are after a physical keyboard to use with your iPad on a desk or table, then the Logitech Tablet Keyboard for iPad is definitely worth considering. However, it adds significant weight to your travels should you carry it around and it isn't suited to use away from a desk or table.

The majority of keyboard accessories for Apple's iPad are either attached to a case or folio, or are simply stand alone Bluetooth keyboards. Logitech's Tablet Keyboard for iPad is a little different — it's a stand alone keyboard with a case that doubles as a stand for the iPad.

The design of the Logitech Tablet Keyboard is certainly unique. The carrying case protects the keyboard when not in use, but also folds open to act as a stand for the iPad when you're ready to do some typing. A plastic stand at the bottom slides out so you can position the iPad at various viewing angles, while also doubling as a lock to keep the case in position. It needs a little force to click into place when positioned as a stand, but it is effective and well designed.

The downside to the case and stand design is the bulk the Logitech Tablet Keyboard for iPad adds to your travels. At 400g, the keyboard adds significant weight to a tablet that has been designed with portability in mind. While many folio type cases also add a bit of bulk and weight, not too many on the market are this heavy.

In addition to the extra weight, the Logitech Tablet Keyboard for iPad is only of use on a desk or table. If you're after a keyboard to rest on your lap when using public transport, for example, then you'll need to look elsewhere. It is almost impossible to balance the separate keyboard and stand on your lap without the iPad toppling over. 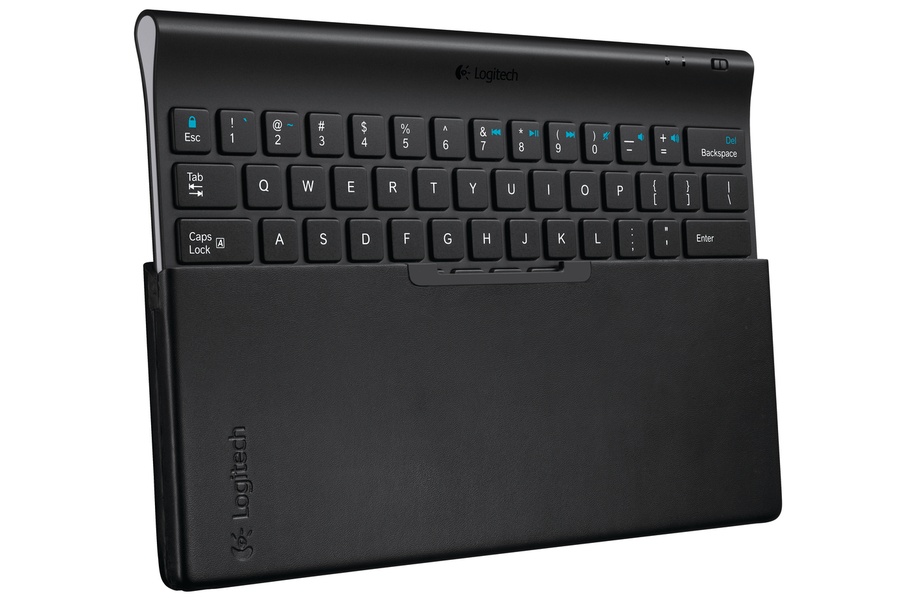 The Logitech Tablet Keyboard for iPad's carrying case protects the keyboard when not in use, but also folds open to act as a stand.

Connecting the Logitech Tablet Keyboard to your iPad is dead simple. Turn it on where it will automatically enter pairing mode. Go to the Bluetooth menu on your iPad to connect it. The iPad will prompt you to enter a four digit code using the keyboard to finalise the connection. The keyboard runs on four included AAA batteries which are housed in a compartment on the rear.

The keyboard itself is comfortable and responsive, offering well spaced keys with great feedback and excellent tactility. It's smaller than a regular desktop keyboard, but large enough to provide a real positive experience. We typed this entire review on the Logitech Tablet Keyboard for iPad and rarely mishit a key. Our only complaint was noise levels, as hitting the key results in a very audible click that quickly became annoying during long typing sessions.

A row of iOS functions keys sit on the top row, denoted by blue icons. These include image slideshow, the ability to hide or show the on-screen keyboard, media playback controls and volume adjustment including a mute key. Build quality is hit and miss. We liked the feeling of what looks to be good quality plastics, but attention to detail is lacking in some areas, particularly in the joint on top.

Logitech says the Tablet Keyboard for iPad will last for a few weeks before the AAA batteries run out, depending how often you use it. We would have preferred an internal battery charged via USB, though frequent travelers without access to a USB port may prefer the simple task of changing the disposable batteries.

Logitech also sells a version of the Tablet Keyboard for Android tablets. It is identical to the iPad version, with the exception of the Android-specific function keys on the top row.