This GPS watch is designed to record multiple activities and can also measure heart rate, but it's not great 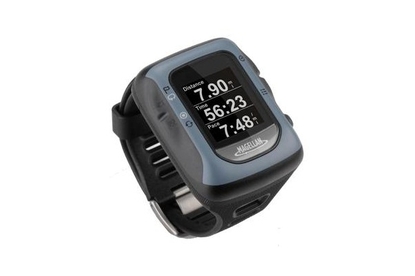 While the idea of a multi-sport watch is nice, the Magellan Switch Up GPS watch didn't perform to expectations in our tests. It was uncomfortable to wear, too hard to use and its data had a tendency to be inaccurate.

The Magellan Switch Up watch is a device that has been designed to appeal to savvy fitness fanatics in a market that is largely dominated by the likes of Garmin and Polar.

The watch has been designed for users who participate in multi-sport activities, such as triathletes, and is suitable for tracking the performance of running, swimming and cycling activities. The watch can be worn on the wrist and also mounted to the handlebars of a bicycle.

The face of the watch is quite large (21x24 mm), and when it is worn on the arm, it completely spanned the width of this reviewer’s wrist. Although it might seem light at 71g and Magellan says it is a ‘slim design’, it can feel bulky and heavy on the wrist while running, particularly for those with a petite build.

The battery-operated heart rate strap, which is meant to aid in training in a particular heart rate zone and counting calories, ran out of battery quickly after only a couple of uses. It also took several minutes for the watch to sync with the heart rate strap.

Magellan boasts that the watch has been designed to find satellites easily and it has a 'highly sensitive GPS receiver’, but we found it annoying having to stand outside for several minutes waiting for the watch to pick up a signal in an inner Sydney area. When it comes to exercise and running, you want to be able to walk out the door and pretty much go while the motivation strikes.

During runs, the GPS signal was also lost a couple of times, with the watch vibrating to alert us to a lost signal. Again, when you’re out for a run, the last thing you want is a vibration alert breaking you out of any exercise-induced ‘zone’ you’re in and having to stop and wait for the watch to pick up a GPS signal again.

In the pool, the watch was inaccurate with the distance covered, often over-recording how far we swam.

The watch also did not have great functionality and was not easy to use. Although it sends vibrate alerts when signals are lost, it’s not easy to work out how to pause and continue a run. It's possible to accidentally split one run into several ‘laps’ when attempting to pause a run. Although some fitness fanatics might be savvy when it comes to fitness products, when you’re out exercising, you want something simple and easy to use.

With a recommended retail price in line with the more popular Garmin and Polar fitness watches ($329 with the heart rate monitor), Magellan might find it hard going in a crowded GPS watch market with what appears, for us, at least, to be an underperforming product.