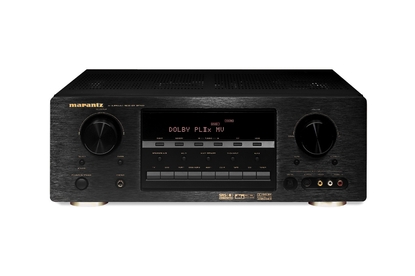 A fantastic effort from Marantz. It has excellent features and reasonable power in a small package.

The SR-7400 goes for the buttony look, with a front panel that's emblazoned with knobs galore. They're tidy enough, however, and don't affect the overall good looks of the Marantz one bit. The physical construction of the 15kg SR-7400 appears faultless and the brushed metal styling of the front fascia is simply gorgeous, although--as with all brushed aluminium finishes--prone to fingerprints. The LED panel is crisp and clean and logical.

Marantz rates the SR-7400 at a continuous 105W, driving all seven channels at 8 ohms (0.05% THD). The SR-7400 was actually the first receiver worldwide to sport the Dolby Pro Logic IIx format for listening to multi-channel music through a 7.1 speaker configuration, a feature that is now standard across many models. Dolby Digital, Dolby Digital EX, DTS and DTS-ES are, of course, supported by the Marantz, as is DTS Neo:6 (the DTS equivalent to Dolby Pro Logic II) and SRS Circle Surround (a technology that can create a 6.1 signal from a mono or stereo source). The usefulness of some of these "pseudo-surround modes" is questionable but Marantz (and indeed all the manufacturers) is able to cater to a wider audience by including more rather than less. Besides, a Source-Direct button on the Marantz bypasses everything to provide a clean audio signal for the audio purists who prefer listening to unmolested music.

A complete mix of inputs and outputs define the rear panel of the Marantz with everything from 6.1 pre-outs to 7.1 inputs for SACD or DVD-Audio compatibility. Component video is catered for by two inputs, and a single output and a raft of AV inputs and outputs should cover just about any device you may want to plug into the receiver. The speaker terminals are a high-quality binding post and there are two sets of terminals catering for a second set of front speakers for multi-room, multi-source listening. Six digital inputs are available, three of which are optical and three coaxial.

Setting up the Marantz was incredibly simple, which more than makes up for the lack of an automatic setup and calibration routine. The OSD is easy to access and straightforward: flick through the menus to enter the distance your listening position is from the speakers, then use the built-in test tones to set the levels for your speakers (either by ear or, preferably, with a SPL meter) to get the SR-7400 sounding sweet. Handily, everything displayed via the OSD is repeated in miniature on the LED display, which means it's possible to set things up or tweak settings without having to turn on your display. The supplied universal remote has a large LCD and is a joy to use.

It was apparent soon after setting it up that this was a powerful receiver, reaching high volume effortlessly with both music and movies. The soundstage was expansive and detailed without being overly bright, which has the effect of making film soundtracks come to life without the treble hurting your ears. Subtle effects that may have previously gone quietly by the wayside--things like water sloshing against the bulkhead in Master and Commander--are brought to bear by the Marantz. When it comes time for music, the brightness has no ill-effect because the mid-range and low end are so gloriously evident, and deep, rolling bass underpins the music without saturating it.