A 10in Medion netbook with a low price Medion's Akoya E1222 netbook is comfortable to use, offers good features and is very well priced. It's useful for everyday tasks such as Web browsing, creating documents and watching videos. However, it does get very warm, which can make it uncomfortable to use on your lap for long periods of time.

Medion's Akoya E1222 is a 10in netbook with reasonably good looks, plenty of useful features, and, best of all, a low, low price. It can be purchased from Aldi supermarkets from 15 July for $389 with Windows 7 Starter preinstalled, and it's a great option for anyone who's been thinking about getting a little laptop.

The Akoya E1222 runs an Intel Atom N455 CPU, which has a frequency of 1.66GHz and features Hyper-Threading; this allows it to process two applications simultaneously. The N455 is more advanced than the N450 CPU found in many other current netbooks, as it supports DDR3 memory. The Akoya E1222 comes with 1GB of DDR2 SDRAM, however. The rest of the specifications are also standard: you get a 250GB, 5400rpm hard drive and integrated Intel 3150 graphics. But there are a few features that make this netbook stand out considering the price you're paying: you also get fast 802.11n Wi-Fi, Bluetooth 2.1, a six-cell battery and a chiclet-style keyboard. 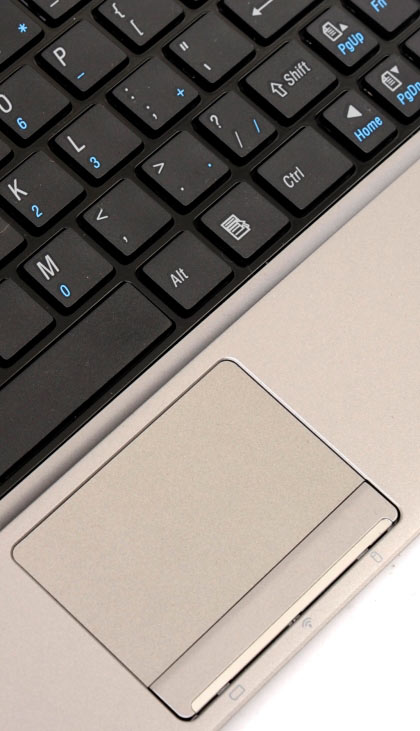 The Akoya E1222 has a chiclet keyboard and a multitouch touchpad.

It's a very nice netbook to use; its keyboard feels solid and the keys are soft but possess good feedback. Some keys, such as the right shift key, the forward slash key and the arrow keys are narrower than the rest, but you get used to them the longer you play with the netbook. The screen is bright and does a good job of displaying movies, but it is a glossy display, so reflections will sometimes be annoying when you're outdoors or in an office.

A 63x36mm touchpad is installed on the palm rest and it is multitouch-aware, so it supports two-finger gestures for actions such as scrolling, zooming and rotating. The driver software has videos that show you how to use all of its gestures.

With its six-cell battery, the little Medion weighs slightly less than 1.2kg and it's very easy to transport to and from work or the classroom. It's a very slim netbook — only 18mm around the edges — but the battery, instead of sticking out of the rear of the netbook, sticks out straight down, making the netbook over 40mm thick at the back. This gives the Akoya E1222 a nice slope when it's on a flat surface, which makes it even more of a joy to type on (for those who like raised keyboards, at least).

The positioning of the six-cell battery really gives the Medion a lift.

Heat is dispersed through a small vent in the left side of the Akoya E1222, but it's not enough to cool the centre of the netbook. This is where a lot of heat is generated, and while it feels very comfortable to use on your lap on a cold winter day, it will be uncomfortable during summer.

The six-cell, 47.52 Watt-hour battery gives the Akoya E1222 an average life away from an outlet — at best. In our rundown test, in which we disable power management, enable Wi-Fi, maximise the screen brightness and loop an Xvid-encoded video, the netbook lasted 3hr 45min. We were hoping for a battery that would give it at least four hours. Of course, that's 3hr 45min of video playback. If you use a power management plan, lower brightness and perform simple tasks on the netbook (such as reading news Web sites and writing text documents), then it will last longer.

In our benchmarks, the Medion Akoya E1222's CPU performed strongly. Its times of 7min 02sec and 7min 45sec in the Blender 3D rendering and iTunes MP3 encoding tests are average, but they compare well against the Samsung N150 netbook, for example, which recorded times of 6min 52sec and 8min 03sec in the same tests. What slowed the Medion down somewhat was its hard drive, which recorded a transfer rate of only 19.27 megabytes per second in our tests. This is approximately 5MBps slower than most of the recent netbooks we've seen, such as Lenovo's IdeaPad S10-3t, but it's faster than Toshiba's NB300. You can feel the sluggishness when installing and launching applications.

As is the case with all netbooks, if you use it for Web browsing, composing documents, reading eBooks, listening to music and watching videos, you'll get a lot of enjoyment out of it — just don't run all of those tasks at the same time.

Around the edges of the Akoya E1222 you'll find three USB 2.0 ports, an Ethernet jack, a D-Sub (VGA) port, an SD card reader, and headphone and microphone jacks. There is a 1.3-megapixel webcam installed in the screen, along with a built-in microphone. The USB 2.0 ports don't supply enough power to some older 2.5in external hard drives, such as an 80GB Maxtor One Touch drive, but newer drives such as a 500GB Samsung S2 will work just fine.

There aren't any bright lights on the Medion netbook; instead, it has subtle green indicator lights (and a single amber one) that won't dazzle your eyes when you use it at night. The base feels solid, although there is some noticeable vibration from the hard drive. The screen's hinges are strong and don't creak when you adjust it, and the power button is situated on the right edge of the spine, which makes the netbook look very neat.

All up, the Akoya E1222 is a pleasure to use, but the heat from its base could end up being uncomfortable when you use it on your lap. Nevertheless, for $389 we think it’s a bargain that should be quickly snapped up if you're currently on the look out for a tiny laptop.