One of the best value PCs on the market, available from Aldi on 18 March Medion's Akoya E4360 D is a desktop PC with plenty of speed; it also has a stack of features and a unique case that includes a built-in mini-USB cable. It's the perfect PC for the home and would suit students and first time buyers. But really, just about anyone who is looking for a PC should head to ALDI on 18 March (the day this model goes on sale) and buy one. It costs only $799 and is one of the best value desktops on the market.

With an asking price of $799 (sans monitor), Medion’s Akoya E4360 D desktop PC, which will be sold at Aldi supermarkets, is testament to the fact that you don’t have to spend big these days in order to get a computer that can do just about everything. We're not exaggerating: the Akoya E4360 D has enough CPU and graphics grunt to let you comfortably perform media encoding tasks, as well as run many of the latest PC games. 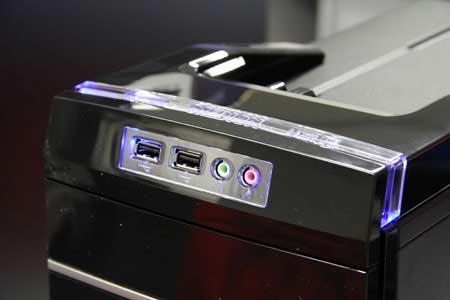 It will be available to buy from Aldi on 18 March, and if you’re in the market for a new desktop you’d be crazy not to try to snap one up. It’s not a PC that’s based on old technology — the Akoya E4360 D is powered by an Intel Core i3-530 CPU, which runs at 2.93GHz, and it has 4GB of RAM, a 1TB hard drive and an NVIDIA Geforce GT330–based graphics card.

In our Blender 3D rendering and iTunes MP3 encoding tests, the Akoya E4360 D recorded times of 50sec and 56sec, respectively. These times are slower than what a typical (and much more expensive) Core i5-based PC can achieve, but any time less than 1min in these tests means that there is plenty of power under the hood.

Its graphics performance is also very good for a sub-$800 PC, as it recorded a score of 9591 in 3DMark06. Generally at this price point you are lucky to get a score over 5000, so it’s refreshing to see that Medion has opted not to skimp in the graphics department. Games such as Crysis will run on this machine at 35 frames per second at a resolution of 1024x768 and with medium image quality. 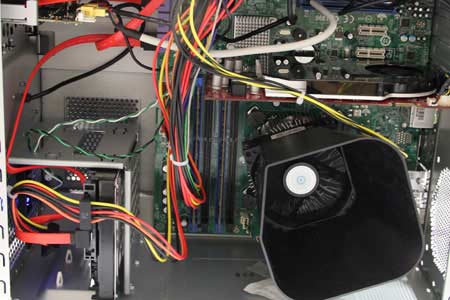 The inside of the case is cramped, but there is some room for future upgrades.

As a computer for the family or for students on a budget, the Medion Akoya E4360 D is perfect. You won’t be stuck with a PC that gets bogged down when you try to multitask, and when you want to get creative you can comfortably edit high resolution photos and videos. Its Core i3-530 CPU may be the entry-level processor in the Intel Core series, but it’s got two physical cores as well as Hyper-Threading. This means there's plenty of headroom when running multiple tasks at the same time. For example, you will be able to rip CDs while downloading torrents, while watching a high-definition YouTube clip, without noticing any sluggishness. And that’s a tame scenario.

The PC’s hard drive performance was also fast, recording 49.3 megabytes per second in our file copying tests. This compares favourably even to high-end machines such as Alienware’s Aurora ALX. The Medion uses a Hitachi-branded drive that has a 7200rpm spin speed and a 1TB capacity. It’s enough space for installing all of your favourite applications and games, as well as for storing all your music. There is some room for drive expansion if you do run out of space.

A mini-tower case houses the Medion Akoya’s components. While it is small, it does have room for one more internal hard drive and one more optical-sized drive (you can install a Blu-ray player in the future, for example). The motherboard has a micro-ATX form factor and is oriented upside down in the case, which means the expansion slots are at the top and the CPU is at the bottom. There are two free PCI Express x1 slots and one free PCI slot available for installing add-in cards (such as a digital TV tuner), and two free DDR3 memory slots.

The design of the case is unusual. The front panel has an extendable mini-USB cable, which comes in very handy for when you want to connect an external hard drive or need to charge your MP3 player; however, it doesn’t do a good job of retracting back into the case. Once it has been extended, it will be a chore to get it back in and make the PC look neat again. 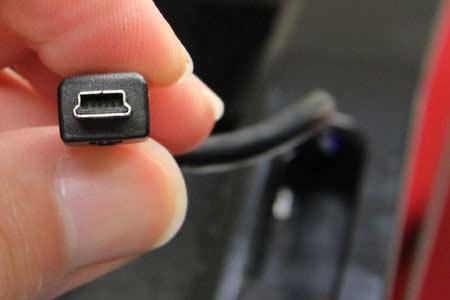 We love this built-in cable because we always end up losing our mini-USB cables.

The case also has a proprietary set of connections (a series of power, USB and eSATA ports) that can be used to conveniently plug in Medion’s HDDrive2Go ultra speed hard drive (note: the Web page is in German). However, unless you already have one of these external drives, you’ll have to wait until Aldi offers them again in one of its specials. 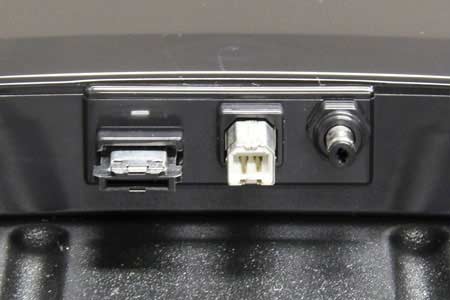 A concealed compartment houses a multi-memory card reader as well as an eSATA port; microphone, headphone and two USB 2.0 ports can be found on the front panel. The two USB 2.0 ports aren’t powered, so they can only be used to connect flash drives rather than external hard drives that rely on the USB port to supply power. 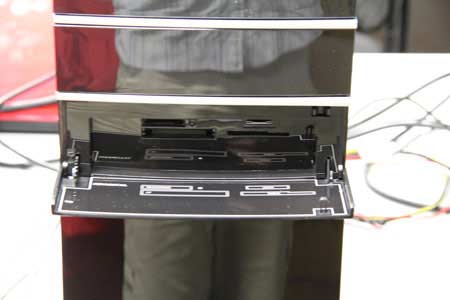 The card reader has slots for Memory Stick, Memory Stick Pro, SD, MMC, CF, Microdrive, SmartMedia and xD cards. In this picture you can also see how reflective the front panel is.

There are six more USB 2.0 ports on the rear though, as well as a FireWire port, Gigabit Ethernet, two PS/2 ports, analog and digital audio connections, and the graphics card has HDMI, DVI and VGA ports. There is even an integrated 802.11n Wi-Fi adapter. As you can see, the Akoya E4360 D pretty much has it all and it even includes a useful user manual that details all of these features and tells you how to hook up the PC — this is perfect for those of you who have never set up a computer before.

The Akoya E4360 D runs Windows 7 Home Premium Edition (32-bit) and ships with recovery discs; you also get CyberLink software for watching and burning DVDs, as well as Microsoft Works 9.0, Corel Draw Essentials 3 and Corel Media One. It’s amazing how much value you get for your money in the Akoya E4360 D and we highly recommend you camp out the night before they go on sale in order to give yourself the best chance possible of procuring one.