Another inexpensive, yet well featured and comfortable to use 15.6in Medion Akoya laptop Medion's Akoya E6228 is a 15.6in notebook with good looks and solid build quality, not to mention plenty of features and a strong configuration. There's not much wrong with it at all, which is surprising given its attractive price point. It could use a slightly better screen a more battery life, but these are minor quibbles.

While thin and light laptops are currently being pushed down our throats, it's easy to forget that 15.6in models are still among the most popular on the market. They may not be as easy to carry around on a daily basis, but they offer good bang for buck with regards to the specifications that you get, and they are comfortable to use for long sessions of word processing or other types of productivity tasks. Medion has been a facilitator of affordable and well-featured 15.6in laptops for a while now, and its latest model is the Akoya E6228 (MD 98980), which goes on sale at Aldi supermarkets this Saturday 28 April. It only costs $599, but it has a strong configuration, useful features, and a style that looks and feels good for a notebook in this price class.

The Akoya E6228 is a 2.5kg, 15.6in notebook that runs a second generation Intel Core i3-2350M CPU, 8GB of DDR3 SDRAM, integrated Intel HD 3000 graphics and a 5400rpm, 500GB hard drive (a Seagate Momentus ST9500325AS). It's a decent configuration for everyday office work, Web browsing, Internet video streaming and even for tougher tasks such as media transcoding. You can't use it for serious 3D gaming, but its graphics performance is still quite strong for such an inexpensive computer system.

This configuration is an upgrade over the Akoya E6224 that we saw last year, except that the hard drive is 500GB in the new model (instead of 750GB), and the older system also featured a USB-based digital TV tuner whereas the new one doesn't. However, it's also $100 cheaper than last year's model and it has a different and, in our opinion, better design with a more convenient port layout and better input peripherals.

In our tests, we saw improvements across the board compared to the old model. The Akoya E6228 completed the Blender 3D rendering task in 52sec (up from 58sec), the iTunes MP3 encoding test in 1min 10sec (up from 1min 16sec) and the AutoGordianKnot DVD-to-Xvid transcoding test in 1hr 5min (up from 1hr 13min). The hard drive recorded a much improved 39.25 megabytes per second transfer rate (up from 18.43MBps) and the graphics recorded 4411 in 3DMark06 (up from 4238). It's definitely a good performer, as was shown by our tests, but it also felt responsive to use during everyday Web browsing and productivity tasks.

Despite being 2.5kg, it doesn't feel overly heavy, and it's not uncomfortable for short periods of lap use — although some of the protruding plastic rests on the base can dig into you if you're not careful. Its chiclet keyboard has keys that feel soft and which are responsive. In fact, it's a great keyboard for long periods of typing. The only drawbacks are the tiny up and down arrow keys and the crammed-in number pad; these take some getting used to.

The overall build quality of the Akoya is very decent. It doesn't feel too cheap, even though it does creak a little when picked up from the left side, and it has strong hinges. The left side has a vent with an extraction fan and a big heat sink, which helps keep the Intel Core i3 processor cool. If you just use this laptop for light Web browsing and typing up documents, the base won't warm up at all. In fact, even if you tax the CPU with tasks such as video transcoding, the base still won't get too warm. This is aided by lots of airspace around the CPU — the components are not packed in tight. 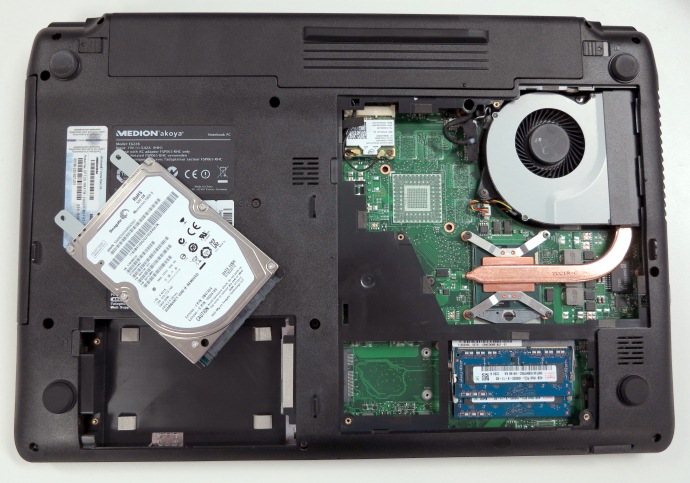 There is plenty of space in the base, with the hard drive located away from the RAM and CPU areas.

The finish is prone to catching fingerprints though, especially the lid and the area above the keyboard, but a cloth is supplied so you can get rid of them.

Along the edges of the Akoya there is a DVD burner (which can be very noisy when it's ripping CDs), four USB ports (two of which are USB 3.0), microphone and headphone ports, a Gigabit Ethernet port (Realtek PCIe GBE), and HDMI and VGA ports. The front has an SD card slot; the screen has a webcam; above the keyboard you'll find stereo speakers, but they produce flat sound. It's definitely a notebook that's well stocked with modern conveniences, and this also includes Bluetooth and an Intel N2230, 300Mbps wireless adapter.

This Akoya is also one of the only budget laptops we've seen to include a set of capacitive buttons above the keyboard. They can be used to mute or change the volume, and to play, pause or skip media content. One of the keys is also a wireless toggle. There was a slight delay in the responsiveness of these keys when we used them while the system was busy doing other things, but they worked well for the most part. They are driven by the POsd.exe and PHotkey.exe processes that run in the background.

The touchpad is 81mm wide and 51mm deep and it supports multi-finger gestures. We found it to be an accurate and responsive pad during our tests and it had no problems recognising two-finger scrolling and three-finger flicking gestures. The palm rest has a very smooth texture that can feel sticky after prolonged typing sessions, but it provides ample space and makes typing on this laptop very comfortable. Blue status lights are positioned on the edge of the left palm rest, but they aren't annoyingly bright.

One thing we love about this model is the use of a matte screen. It's not susceptible to reflections and can therefore be used comfortably in a lit room, although it's not a very bright screen. Like most laptop screens, its vertical viewing angles aren't great and the sharpness of the screen is a little low, which can make text look messy at times. For everyday use though, and even for just viewing photos or YouTube videos, it's a passable screen. It has a native resolution of 1366x768.

You can plug in to a big-screen TV using HDMI if you want to get a better view, or, if you're sick of cables, you can make use of the laptop's Intel WiDi-capable wireless module. With a TV adapter from the likes of Belkin (ScreenCast TV) or Netgear (Push2TV), you can use your TV as a second, wireless display for this laptop while you lounge around on the couch.

The battery life on this model is not as good as what we saw from the E6224 last year. In our rundown test, in which we disable power management, enable Wi-Fi, maximise screen brightness and loop an Xvid-encoded video, the E6228's battery lasted 3hr 8min, which is over an hour less than the E6224's battery. It's understandable though, given that the E6228 has a 47 Watt-hour battery and the E6224 had a 61.92 Watt-hour battery. Anything over three hours for a big, 15.6in laptop is generally a good showing, but having the same life as the previous model would have been nice.

There's no doubt that this is yet another good value proposition from Medion. The Akoya E6228 is built well for an inexpensive laptop, has a decent design and feature-set, it's comfortable to use and it performs well. For $599 it's hard to ask for more. It will be available from Aldi supermarkets on Saturday 28 April.